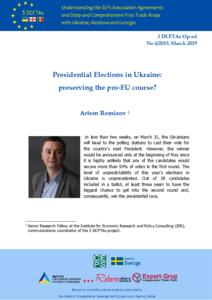 In less than two weeks, on March 31, the Ukrainians will head to the polling stations to cast their vote for the country's next President. However, the winner would be announced only at the beginning of May since it is highly unlikely that any of the candidates would secure more than 50% of votes in the first round. The level of unpredictability of this year's elections in Ukraine is unprecedented. Out of 39 candidates included in a ballot, at least three seem to have the biggest chance to get into the second round and, consequently, win the presidential race.

According to the aggregated opinion poll compiled by the Texty project, [1] Volodymyr Zelenskyi, a popular comedian and film producer, is leading with 19.5%. The current president Petro Poroshenko goes toe-to-toe with the ex-prime minister Yuliia Tymoshenko — both have slightly more than 13% of voter support. Also, one should not write off completely Yurii Boyko (7.8%), one of the ex-allies of a run-away president Victor Yanukovych, and Anatoliy Hrytsenko (6.9%), the minister of defence during Victor Yushchenko’s presidency. While looking at those rankings, it is important to bear in mind that various polls provide different numbers, and quite often those do not correspond to final results. Moreover, around a quarter of Ukrainian voters remains undecided and will make up their mind in a few days before the elections or in front of the ballot box.

What implications could the future result have for Ukraine’s policy towards the EU? When one analyses the candidates’ electoral programmes, it is rather striking how much attention is paid to social and economic issues and how little is dedicated to the matters of foreign and security policy. Indeed, even within the premier-presidential system in Ukraine, the head of state holds considerable powers in relation to the executive and legislative branches (for instance, the right of legislative initiative). However, the candidates avoid mentioning how they would implement policies that go beyond their constitutional powers in case they do not have a stable supportive majority in the Rada.

The goal of joining the EU is clearly stated only in the programme of the current president. What is more, Poroshenko aims to apply for the EU (and NATO) membership by 2023. While the incumbent’s programme focuses mostly on the progress achieved since 2014, other top four candidates did not bother including explicitly the geopolitical orientation into their electoral manifestos at all. References to the EU appear mainly in regards to promises to guarantee ‘European standards’ of salaries, pensions, education, infrastructure, and other social benefits. Thus, the candidates exploit ‘the EU as a social heaven’ narrative while putting aside the issue of the implementation of the Association Agreement (AA). But based on public statements of frontrunners and their representatives, one can conclude that Zelenskyi, Tymoshenko, and Hrytsenko are also in favour of Ukraine becoming a member of the EU.

However, there are some reservations. For Zelenskyi (or rather his foreign policy advisor), Ukraine will not be able to join the EU as long as there is a territorial conflict in the country. This echoes Boiko’s position whose representative stresses the need to reach the peace first and stop knocking into the EU's doors since nobody is waiting for Ukraine inside. For Tymoshenko’s team, Ukraine should proceed with adjustment of the AA by updating annexes, or even move to the next level of relations with the EU (AA+), [2] rather than applying AA/DCFTA unconditionally. [3] A more pragmatic tone also present in Hrytsenko’s programme: “there will be no false promises to foreign partners”, and “nobody will dictate its will to Ukraine since the President will conclude only agreements benefiting Ukraine”. Notably, the candidate’s programme advocates several protectionist measures that may contradict Ukraine’s obligations under AA/DCFTA, such as the firewood export ban and provision of preferences to the Ukrainian producers of equipment for infrastructure projects. Another precarious proposal — abolishing the value-added tax (VAT) — is present in Tymoshenko’s programme. Thus, while four out of five top candidates take a pro-EU stance (with exception of Boiko), their visions on how to build relations with the EU are rather ambiguous.

Apparently, the electoral programmes and promises should be taken with a grain of salt: in Ukraine, candidates tend to forget those immediately after they enter the office. As a result, the pre-election unpredictability may easily culminate in a post-electoral one. Ukraine’s progress on its ‘European path’ will be defined by successful accomplishment of reforms homework rather than by loud statements. At the same time, whoever becomes the next President, he or she will have less room for manoeuvre in foreign policy: the course for obtaining full membership in the EU is determined by public opinion [4] and, since recently, by Ukraine's Constitution itself.

[1] The scores represent median for support rate; consulted on March 20.

[2] The idea of ‘AA+’ is advocated by Michael Emerson, the leader of the 3 DCFTAs project.

[3] Based on the discussion between advisers to the presidential candidates at the Brussels UkraineLab organized by Ukrainian Think Tanks Liaison Office in Brussels on February 25.

[4] According to the poll conducted by the Ilko Kucheriv Democratic Initiatives Foundation in December 2018, 59% of surveyed were in favour of the EU membership of Ukraine.