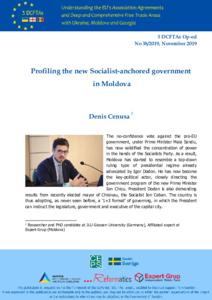 The no-confidence vote against the pro-EU government, under Prime Minister Maia Sandu, has now solidified the concentration of power in the hands of the Socialists Party. As a result, Moldova has started to resemble a top-down ruling type of presidential regime already advocated by Igor Dodon. He has now become the key-political actor, closely directing the government program of the new Prime Minister Ion Chicu. President Dodon is also demanding results from recently elected mayor of Chisinau, the Socialist Ion Ceban. The country is thus adopting, as never seen before, a ‘1+3 format’ of governing, in which the President can instruct the legislature, government and executive of the capital city.