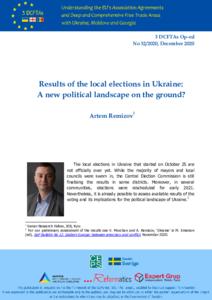 Results of the local elections in Ukraine: A new political landscape on the ground?

The local elections in Ukraine that started on October 25 are not officially over yet. While the majority of mayors and local councils were sworn in, the Central Election Commission is still finalising the results in some districts. Moreover, in several communities, elections were rescheduled for early 2021. Nevertheless, it is already possible to assess available results of the voting and its implications for the political landscape of Ukraine.

These elections were set to become unique for a number of reasons. Firstly, the unfolding decentralisation reform provided newly created amalgamated communities with considerable financial resource. Secondly, the new Election Code introduced open-list elections in municipalities with a population over 10,000. However, by reducing the initial threshold for elections to run by party lists from 90,000 to 10,000 citizens, the law prevented nomination of independent candidates in many smaller constituencies. Also, the scope of preference voting for individual candidates within the party list was considerably narrowed: to move up within his/her party list, a candidate has to gain a minimum number of votes equal to 25% of the electoral quota. Thus, the new legal framework contributed to increasing partisanship on the local level. However, contrary to expectations of the national political forces, these factors did not result in their complete domination in the electoral process.

If combined, the parliamentary parties did win a relative majority of mandates in 22 regional (oblast) and 119 rayon councils (see Tables 1 and 2, Figures 1 and 2). Among those, the incumbent president’s ‘Servant of the People’ party (SP) came first by taking almost 18% and almost 17% of all seats in oblast and rayon councils respectively, while securing representation in all of them. Also, around 16% of mayors and heads of hromadas (amalgamated territorial communities) are members of the ‘Z-team’.

At the same time, these results are nothing compared to SP’s success at the 2019 parliamentary elections. A year ago, the party got 43% of votes and secured 254 out of 445 MP seats in the Rada, including winning all 13 single-member districts in the capital. This time SP came first only in four oblasts, entered the Kyiv City Council in sixth place, and ended up without a single mayor in an oblast centre. It seems that Zelensky’s attempts to mobilise its electoral base by indirectly campaigning for his party during regional trips and by organising a populistic ‘national survey’ on the election day had a limited impact. The elections have confirmed the growing dissatisfaction with the president’s party and the government amid serious worsening of both epidemiological and economic situations.

Against this background, all main opposition parties —with the exception of the ‘Voice’ —have improved or maintained their positions. The ‘European Solidarity’ of the ex-president Poroshenko got slightly more than 15% and 13% of all seats in oblast and rayon councils respectively, and became the second party that has representatives in each of them. Moreover, it outran the competitors for seats in four oblast councils and the Kyiv City Council. The pro-Russian ‘Opposition Platform – For Life’ also secured the first place in four oblast councils in the South, but did not get into eight councils at all. Yulia Tymoshenko’s ‘Fatherland’ party has put representatives into twenty oblast councils, won elections in one oblast, and secured almost 11% and 10% of all seats at the oblast and rayon levels respectively. However, if one takes a closer look into the results, it becomes clear that the real winners of the 2020 elections were local political projects.

Figure 1. Parties that gained a relative majority of seats in oblast councils. 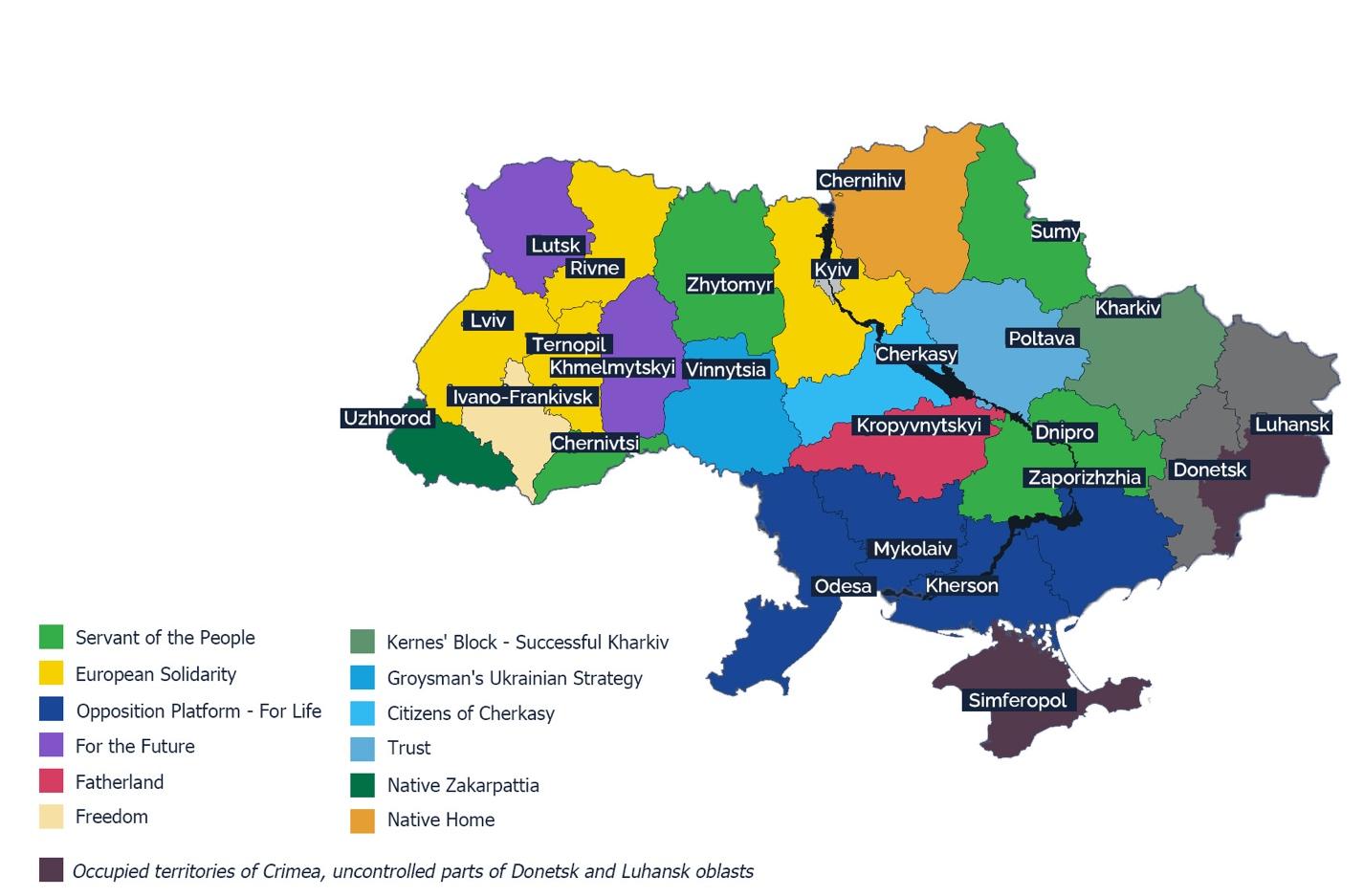 Figure 2. Parties that gained a relative majority of seats in rayon councils. 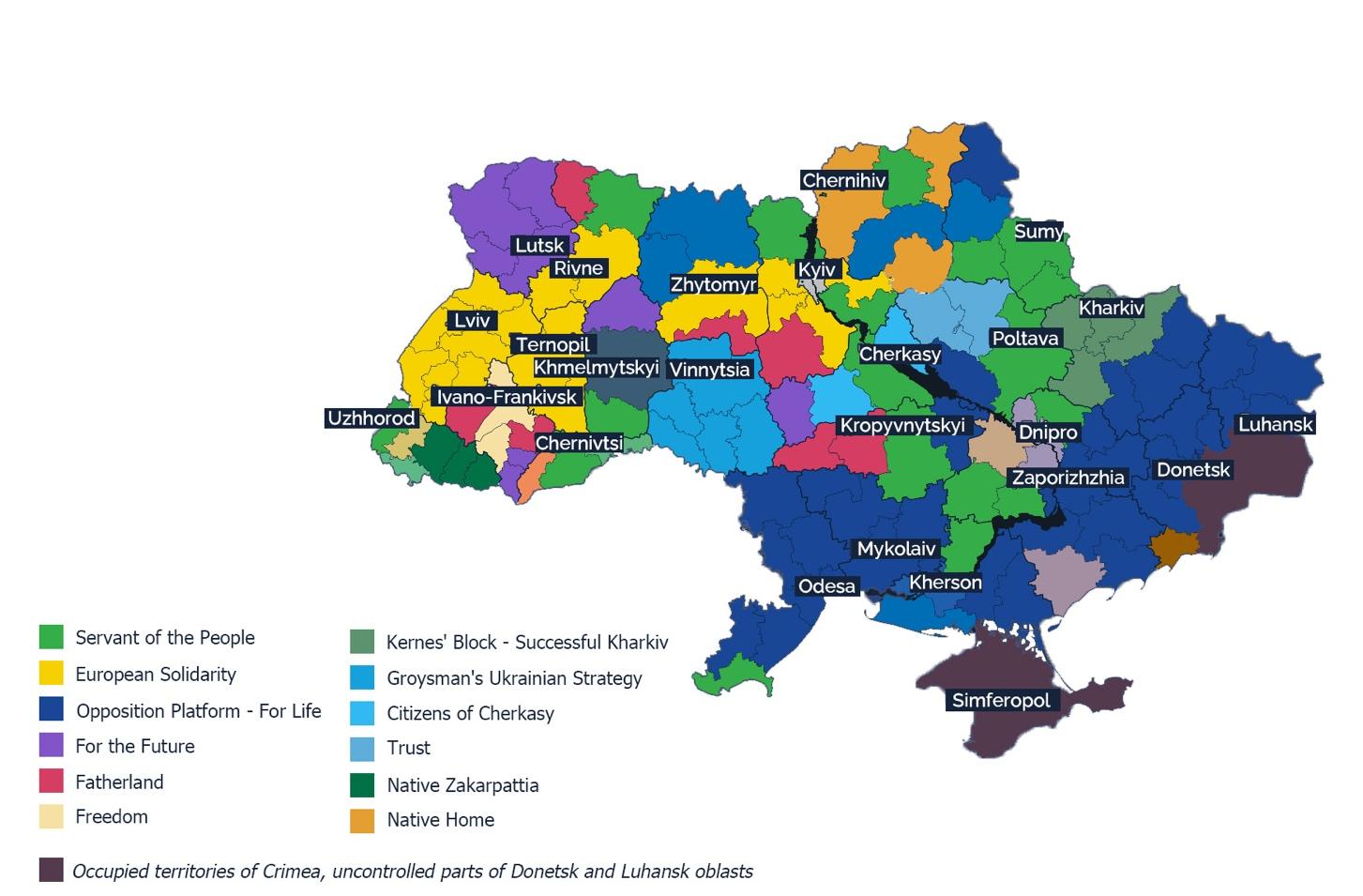 No country for parliamentary parties?

Local elites have found the way to overcome partisanship constraints put by the new Election Code. Rather than entering the ranks of established parties, they chose to register their own all-national political organisations and run for regional offices independently. As a result, local political projects won elections in 7 oblast councils: Vinnytsia (‘Groysman's Ukrainian Strategy’), Kharkiv (‘Kernes' Block - Successful Kharkiv’), Cherkasy (‘Citizens of Сherkasy’), Zakarapattia (‘Native Zakarpattia’), Chernihiv (‘Native Home’), Poltava (‘Trust’), Khmelnytskyi (‘Symchyshyn’s Team’, although it shares the 1st place with the ‘For the Future’ party). Most of these successful local parties were established by mayors of big cities. It is notable that incumbent mayors got re-elected in 18 out of 27 largest cities in Ukraine. (For other interesting developments see Table 3).

Also, one should not forget about independent candidates that do not belong to any national or regional political party. Those candidates won a majority of seats (19.1%) in the councils of smaller cities and communities, and took 47.4% of all mayor/head of hromada offices. Although the share of winning independents for the latter positions remains larger than the share of those representing parties, it has dropped significantly – from 81% in 2015 – as a result of increasing attention to elections in smaller communities on the part of political parties.

The decentralisation reform that shifted considerable financial resources from the centre to the regions increased the attention of national and regional elites to the 2020 local elections. In many instances, regional elites have successfully distanced themselves from the main national political forces and managed to secure considerable public support that provides them with stronger political leverage. Moreover, the falling approval ratings of the president’s ‘Z-team’ prevented it from a further monopolisation of power in the country. As a result, the political field in Ukraine at the local level became more diversified, with political power (almost equally) distributed between various national and regional political actors. It remains to be seen what kind of coalitions, either permanent or ad hoc, will be formed on the ground and how willing political players will be to compromise.

In this respect, although pro-Russian forces managed to maintain their positions in some of the regions, the polarisation across the East-West line became less clearly visible. At the same time, the conflict between the centre and periphery may be the one to watch in the near future. On the one hand, the ‘localisation’ of local politics provides the opportunity to move self-government closer to citizens and focus on local rather than national issues, thus bringing real benefits to communities. On the other hand, in the absence of strong central government and effective state institutions that would control the legality of actions of local authorities and elites, there is a danger of ‘feudalisation’ of Ukraine given the increasing powers and resources of those communities. Moreover, the oligarchic groups (not to mention pro-Russian forces) could use the ‘regional card’ to leverage the central government. In this scenario, the decentralisation could cease to exist as Ukraine's success story.