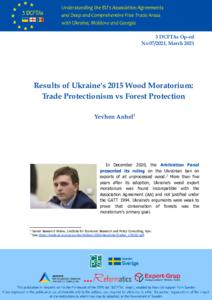 In December 2020, the Arbitration Panel presented its ruling on the Ukrainian ban on exports of all unprocessed wood. More than five years after its adoption, Ukraine's wood export moratorium was found incompatible with the Association Agreement (AA) and not justified under the GATT 1994. Ukraine's arguments were weak to prove that conservation of forests was the moratorium's primary goal.

Ukraine's parliament introduced the 10-year moratorium on round wood exports in 2015. It became partially effective (for species other than pine) from November 1, 2015, and fully effective (including pine) from January 1, 2017. Since the very beginning, the EU emphasized that export restrictions contradicted the AA. Abolition of the moratorium even became one of the conditions for receiving EU macro-financial assistance. However, EU-Ukraine discussions and consultations did not result in lifting the export ban. In June 2019, the EU requested the establishment of an arbitration panel.

Ukraine based its defence on the claim that forests are the "national treasure" and have to be preserved.  The ratio of forest to the total area puts Ukraine only in the 34th place in Europe, and the forest cover is lower than recommended for the country (15.9% vs 20%). In 2018, the Verkhovna Rada also set the limit of domestic wood consumption at 25 million cubic meters and criminalized round wood smuggling to justify the moratorium. However, environmental objectives have not been genuinely included in the moratorium's design. As a result, the EU argued that the guise of environmental measures just shielded domestic industry, and the export ban allowed a "high and unprecedented level of domestic consumption" in Ukraine.

Official statistics show that export restrictions do not have a direct impact on logging. In 2013-2019, the volume of logged wood had remained circa 18-20 million cubic meters (see Figure 1). It is much lower than the limit on domestic consumption established by the parliament.

Ukrainian politicians also argued that the moratorium should fight illicit logging, but its volume is unknown. Official statistics contain numbers regarding only revealed cases (118 thousand cubic meters in 2019), but the real volume might be dozens of times higher. As a result, there is no evidence of the moratorium's impact on logging (both legal and illegal).

Many Ukrainian experts agreed that the restrictions were more helpful for Ukraine's manufacturers than for forest protection. Initially, domestic industry support was defined as the moratorium law's principal objective, based on its explanatory note. Export ban undoubtedly boosted wood processing, primarily the sawmill industry expansion (more than +50% cumulatively in 2014-2020). As a result, wood processing was one of the few industrial sectors that grew compared to 2013. The export ban also stimulated the development of unregistered small sawmills. It was estimated that in 2017 there were about 21 thousand sawmills in Ukraine, of which 12 thousand were illegal. The numbers above support the argument that the sawing industry was the primary beneficiary of the moratorium.

Furniture manufacturing demonstrated more moderate growth than the sawing industry, cumulatively +16% in 2014-2020. Nevertheless, the moratorium on the sector is uncertain. Furniture manufacturers also had other incentives that could spur production. In particular, Ukrainian companies fulfilled domestic demand after imports decreased thrice in 2015-2017 due to devaluation. Almost half of the produced furniture is sold within Ukraine. 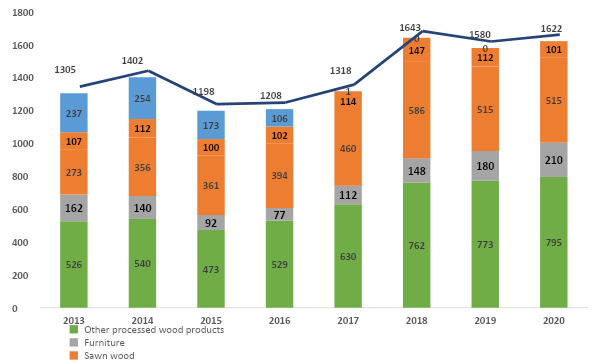 Note: The chart includes information on wooden furniture used in the office, kitchen, bedroom, and other kinds

Trade statistics mirror changes in production (see Figure 3). Exports of wood, wood products, and furniture in total increased by a third from 2015 to 2018, when its value reached its peak recently (USD 1.6 billion).

To sum up, official statistics show that the wood moratorium of 2015 was primarily a protectionist measure. According to the Arbitrator Pane's ruling, now Ukraine must resolve the breach of its obligations under the AA. However, the moratorium's consequences are a good lesson for the government and parliament that the design of their decisions must be well considered before adoption.