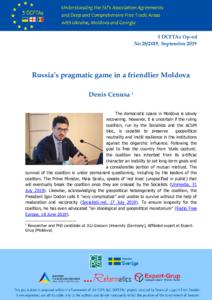 The democratic space in Moldova is slowly recovering. However, it is uncertain if the ruling coalition, run by the Socialists and the ACUM bloc, is capable to preserve geopolitical neutrality and instill resilience in the institutions against the oligarchic influence. Following the goal to free the country from ‘state capture’, the coalition has inherited from its artificial character an inability to set long-term goals and a considerable portion of mutual mistrust. The survival of the coalition is under permanent questioning, including by the leaders of the coalition. The Prime Minister, Maia Sandu, speaks of ‘red lines’ (unspecified in public) that will eventually break the coalition once they are crossed by the Socialists (Unimedia, 31 July 2019). Likewise, acknowledging the geopolitical heterogeneity of the coalition, the President Igor Dodon calls it “very complicated” and unable to survive without the help of moderation and reciprocity (Socialistii.md, 17 July 2019). To ensure longevity for the coalition, he has even advocated “an ideological and geopolitical moratorium” (Radio Free Europe, 18 June 2019).