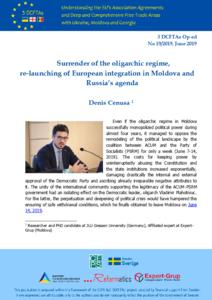 Surrender of the oligarchic regime, re-launching of European integration in Moldova and Russia’s agenda

Even if the oligarchic regime in Moldova successfully monopolized political power during almost four years, it managed to oppose the remodeling of the political landscape by the coalition between ACUM and the Party of Socialists (PSRM) for only a week (June 7-14, 2019). The costs for keeping power by uninterruptedly abusing the Constitution and the state institutions increased exponentially, damaging drastically the internal and external approval of the Democratic Party and ascribing already irreparable negative attributes to it. The unity of the international community supporting the legitimacy of the ACUM-PSRM government had an isolating effect on the Democratic leader, oligarch Vladimir Plahotniuc. For the latter, the perpetuation and deepening of political crisis would have hampered the ensuring of safe withdrawal conditions, which he finally obtained to leave Moldova on June 14, 2019.

The similitude of the positions stated by the U.S., the EU and Russia concerning the legitimacy of the ACUM-PSRM government (IPN, June 9, 2019) fueled the perception of a trilateral agreement. In reality, these players supported a common objective – the alternation of power in Moldova and democratization of the political process in Moldova (NewsMaker, June 15, 2019). In other words, the intolerance to oligarch Vladimir Plahotniuc coincided without requiring the three players to formalize the coordination of their steps.

The difference between Russia and the other two players – the U.S. and the EU – is that the first does not reject the existence of oligarchs as long as they show (geo)political loyalty and become controllable through political-economic arrangements (Foreign Policy, June 10, 2019). At the same time, the Western powers tend to accept the oligarchs in the Eastern neighborhood if they do not hinder the reform process (case of Bidzina Ivanishvili in Georgia) and of Petr Poroshenko). However, the West fully dissociates itself from those who gravely undermine the democratic institutions and the rule of law. This explains West’s negative reaction both in relation to the abuses of the power that reached an apogee in Viktor Yanukovych’s Ukraine in the winter of 2014 and in Moldova under the regime of oligarch Vladimir Plahotniuc at the start of June 2019. On the other hand while Russia actively supported the pro-Russian Yanukovych and exploited Ukraine’s weaknesses, it joined in the foreign pressure against oligarch Plahotniuc.

The Democrats’ attempts to negotiate a coalition government with the Socialists (February – June 2019), including by accepting a multi-vector foreign policy, were aimed at overcoming the external isolation (Daleko-Blisko, March 21, 2019). But the Democrats’ offer aimed at unfreezing the Moldovan-Russian dialogue was ignored by Moscow, which instead pleaded for the allying of the Socialists with the Bloc ACUM even for a short period of time (Radio Chisinau, June 3, 2019). The Russian side chose in favor of the democratization of Moldovan politics as this would inevitably lead to the fragmentation of the political spectrum and, possibly, to the intensification of Russia’s influence.

Democrats’ capitulation as a foreign objective for stabilizing Moldova.

Vladimir Plahotnic’s decision to switch off the oligarchic regime on June 14 resulted from the actions of other players than Russia. On the one hand, Romania toughened up its viewpoint on the political-constitutional crisis in the neighboring country. The President of Romania Klaus Iohannis requested the European Commission and the European Council to take urgent measures to solve the political crisis in Moldova (Mediafax, June 12, 2019). On June 14, presidential adviser Bogdan Aurescu was delegated to hold talks with political players in Chisinau (Presidency.ro, June 14, 2019). The conviction of the ex-leader of the (Romanian) Social Democratic Party Liviu Dragnea to three years in jail spoiled the image of the SDP government and, respectively, its capacity to support the regime of Plahotniuc. Also, the President had strengthened his positions in Romania following the anti-corruption referendum validated during May 2019 European Parliament elections. The two political changes made the official Bucharest’s actions with regard to the political realities in Moldova more credible.

On the other hand, the regime of Vladimir Plahotniuc was brought to an end following the intervention of decision makers from Washington. Representatives of the U.S. Embassy in Chisinau had discussions with representatives of the Plahotniuc’s Democratic Party not long before the decision to withdraw from power was made public (Unimedia, June 14, 2019). At the same time, ex-Speaker Andrian Candu travelled to Washington two days before the Democrats’ capitulation (NewsMaker, June 12, 2019). Such intensification of contacts shows that Plahotniuc tried to soften the position of the Americans.. Ultimately, the U.S. authorities (State. gov, June 14, 2019) and Romania both welcomed the Democrats’ decision to transfer the power. The EU and Russia later joined the positive appraisals of the peaceful transfer of power (NewsMaker, Presidency.ro, June 14, 2019).

The contribution made by Romania, EU and the U.S. to the management of the Moldovan crisis is underpinned by several explanations. For Romania, which will hand over the rotating presidency of the EU at the end of June, the worsening of the situation in Moldova would have represented a major strategic failure. At the same time, a further deepening of the crisis in Moldova would have become imminent if the mass protests scheduled for June 16 had been mounted, but they were annulled after the power was transferred to the new government Gov. md, June 15, 2019. For this reason, the U.S. and EU had to act to prevent the destabilization of another Eastern country that already has territorial integrity problems (Transnistrian region). Seen in connection with the situation in Ukraine, the prevention of the worsening of the crisis in Moldova stimulated the Western forces to mediate, even if the Democrats’ withdrawal from power implied the departure from Moldova by Plahotniuc.

Plahotniuc's actual departure occurred under unknown circumstances the same day when the Democrats gave up from power (14 June). According to the official reports, Plahotniuc, and another ally of him, Ilan Shor, convicted for the banking fraud, did not leave Moldova. This confirms that the oligarch left the county through illegal ways. The media reported that his exit was through Transnistrian region into Ukraine. Interestingly, on the day of his departure a Romania-Ukraine meeting at the level of Foreign Affairs Ministers was organized to discuss the political situation in Moldova.

The simultaneous mobilization of the supporters of the Socialists and ACUM for the protests planned for June 16 could have amplified the domestic pressure on the Democrats. Given that the PSRM-ACUM tandem won almost 60% of the votes cast in the elections of February 2019 (830,000), their protests could have easily reached the proportions of the protests of 2015-2016 – 100,000 people.

A re-run of the traumatizing post-electoral events of April 2009 in Moldova was becoming an inevitable direction for which the Democrats were heading and this would have annulled any privilege or possibility of surviving politically and of eventually returning to power. For these reasons, to avoid violence, the immediate alleviation of the situation and the transfer of power to the PSRM-ACUM coalition was the only West-supported solution acceptable to the Democrats.

European reforms and dialog with Russia.

The re-launch of the European integration after the Democrats’ departure from power will be faster than the improvement of the dialogue with Russia. The list of priorities includes the unfreezing of the political dialogue with Brussels and fulfillment of the technical and political conditions neglected by the Democrats. Also, the setting of the date of local elections, including in the capital city, by Parliament will enable an end to the polemics concerning the fraudulent annulment of the results of the mayoral elections held in Chisinau in 2018. The improvement of the relations with the EU will be simplified by the fact that the ministries that can help resuscitate the European agenda are managed by apolitical representatives that came from the diaspora – Nicu Popescu (Ministry of Foreign Affairs and European Integration), Natalia Gavrilița (Ministry of Finance) and Vadim Brânzan (Ministry of Economy and Infrastructure).

Even if Russia expresses its readiness to develop constructive relations with the new government (MID.ru, June 15, 2019), the Government led by Maia Sandu will be unable to overlook the commercial sanctions imposed by Moscow, its manipulation of migration policies to the detriment of Moldovans, and the Russian presence in the Transnistrian region. The structural deficiencies in Moldovan-Russian relations will necessitate an able prioritization of the subjects that should be addressed, for example in the commercial and energy sectors.

The reforms that help implement the Association Agreement with the EU can be done in parallel with the development of balanced relations with Russia, but only if Moldovan interests are protected. Also, any rapprochement with Russia will imply the tempering of the anti-Russian rhetoric inside ACUM, which contains harsh positions on the negative impact of the Russian influence on Moldova through the monopoly in the energy sector, and support for Transnistrian separatism.

The oligarchic regime’s capitulation does not solve all the problems automatically. It requires political stability to re-launch the process of reforms and returning to a healthy dialogue with the EU and other foreign partners. The display of political will for adopting the delayed or truncated reforms will bring the unblocking of European assistance closer.

At the moment of de-oligarchization, the PSRM-ACUM government will have to contribute to strengthening the institutions by restoring professionalism and political independence. The government will need a dynamic legislative body that adopts the decisions from the European integration agenda where ACUM could bank not only on the Socialists, but also need some support of the Democrats who become an important parliamentary opposition force (30 MPs).

The improvement of relations with Russia, which until now were reduced to dialogues with President Dodon, is a difficult mission. The Russian authorities’ sincerity will be tested when the Moldovan authorities will seek the extradition of Ilan Shor, who was convicted of the banking fraud and who found refuge in Moscow alongside the fall of the oligarchic regime.

As long as there was a common enemy - Vladimir Plahotniuc - ACUM chose to ignore the Russian factor. For this reason the disappearance of the oligarchic regime will soon test how real or superficial is the alliance between the government headed by Maia Sandu, on the one hand, and Speaker Zinaida Grechanyi and President Igor Dodon, on the other hand.