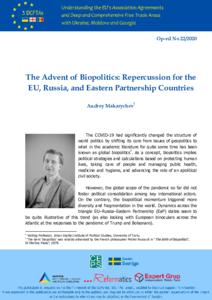 The Advent of Biopolitics: Repercussion for the EU, Russia, and Eastern Partnership Countries

The COVID-19 had significantly changed the structure of world politics by shifting its core from issues of geopolitics to what in the academic literature for quite some time has been known as global biopolitics. As a concept, biopolitics implies political strategies and calculations based on protecting human lives, taking care of people and managing public health, medicine and hygiene, and advancing the role of an apolitical civil society.

However, the global scope of the pandemic so far did not foster political consolidation among key international actors. On the contrary, the biopolitical momentum triggered more diversity and fragmentation in the world. Dynamics across the triangle EU–Russia–Eastern Partnership (EaP) states seem to be quite illustrative of this trend (as also looking with European binoculars across the Atlantic at the responses to the pandemic of Trump and Bolsonaro).

For the EU, the basic challenge has been how to integrate biopolitical priorities into its normative power framework. Of course, some steps in this direction were made before the eruption of the COVID-19 crisis: for example, the idea of responsibility to protect (R2P) to which the EU seems to be highly sympathetic was based on a strong biopolitical principle of saving human lives irrespective of identities or ethnic and other affiliations. Another example might be the idea of a “European way of life” that has recently entered EU’s political lexicon, with a broad range of biopolitical pointers – from saving lives of immigrants to securing consumer rights. However, the 2020 pandemic has unveiled the harshest biopolitical challenge in the EU’s history.

The model policy response was provided by Angela Merkel, who led Germany’s outstanding performance of care and competence in limiting the ravages of the pandemic, and more exactly keeping the fatalities to a minimum. The rest of core EU suffered greater losses but almost all adopted a similar policy of lockdowns, testing, mobilization of massive hospitalization, and economic solidarity with the new unemployed. There have been only a few outliers from this model response, for example Hungary that used the pandemic as a pretext for usurpation of power and rule by decree, while Sweden pursued a permissive policy rejecting strong restrictive measures by state authorities. At the level of the EU its unprecedented set of 750 billion euro ‘recovery’ measures adopted on 21 July redistributed resources on major scale in favour of the populations hardest hit.

A common EU biopolitical agenda towards EaP takes shape in two forms. The first is based on material intervetion (namely, through financial assistance packages). Second, the EU further promotes the concept of resilience as a key part of its foreign policy toolkit, which implies a complex of measures to stimulate the self-secured societies among EU’s neighbors. This includes not only technical preparedness (the business of the state), but also enticement of social responsibility among citizens and civil society groups. The EU thus appears to combine the predominantly values-based model of liberalism with technocratic methods of rational and efficient governance.

On the other hand, Russia’s agenda advances its own hybrid version of illiberalism. Domestically, Russia is clearly moving towards a model of social conservatism heavily relying on ‘pastoral power’ – a mixture of religious Orthodoxy and the increasingly sacrosanctified sovereign authority personified by Putin. The reference to God in the new constitution is likely to undermine the idea of the secular state in Russia, and create more space for public roles by the religious authorities. What becomes increasingly clear is that Russian “pastoral power” is anything but biopolitical – it is more aimed at legitimizing the function of the state to send citizens to battlefields than at promoting and taking care of people’s lives. The most recent confirmation for this came from the patriarch Kirill who congratulated the Russian people on the occasion of the anniversary of the beginning of the German-Soviet war in 1941 that took millions of lives. The religious glorification of war serves as an important element of the ongoing militarization of Russian society aimed at raising the potential acceptance of Russian force projection in the future.

This explains another facet of hybridity of Russian illiberal agenda – a special combination of biopolitics and geopolitics. When Putin famously declared the fall of the Soviet Union a major geopolitical catastrophe of the 20st century, he had in mind its biopolitical dimension, arguing that millions of Russians have found themselves beyond the Russian borders and allegedly in need of help and protection from Moscow. Yet when in June 2020 Putin directly called upon countries that seceded from the USSR to return “authentically Russian territories”, he basically had in mind a perspective of a geopolitical reshuffling in the post-Soviet world. The COVID-19 has actually diminished the biopolitical elements in Russian neighborhood policy: in a situation of the real crisis caused by the pandemic, Moscow did nothing to help Russian-speakers living abroad. In this sense the Russian world doctrine remains chiefly declaratory and rhetorical rather than conducive to practical policies.

Under these conditions EaP countries find themselves in a complex situation with new challenges. First of all there are the repercussions of the global shift towards biopolitical forms of power: nowadays issues of medicine and health care not only become core elements of security and resilience, but in a more general sense are likely to define the sustainability of national sovereignties. In other words, countries struggling for their sovereignty should invest much more in developing biopolitically resilient societies, and this seems to be one of those policy tracks that might bring them closer to the EU. The EU’s decision to support all six Eastern Partner states resonated positively not only in the three associated states (Georgia, Moldova and Ukraine). Armenia noted the EU’s aid arriving alongside nothing from Russia, despite its security guarantees from Moscow. Lukashenko’s attempted denial of the pandemic led local authorities to act in his place, and his re-election bid in August becomes more contested than ever. Georgia seems to be a success story in tackling the pandemic, while Ukraine faces a harsh challenge of qualitatively upgrading its medical infrastructure.

Finally, COVID-19, in spite of some expectations, did not boost a more cooperative behavior between states. On the contrary, as the recent resumption of military confrontation in July between Armenia and Azerbaijan showed, the common epidemiological threat did not prevent the two neighbors from another wave of escalation on the border (to which might be added the hostilities at the Indian-Chinese border in June). Indeed, on the defensive against the common Covid-19 enemy at home, they now appeal to patriotism in the fight against the external enemy. Geopolitical clashes, therefore, are to stay, yet with the global advance of the biopolitical agenda they are to look more and more archaic and jarring.