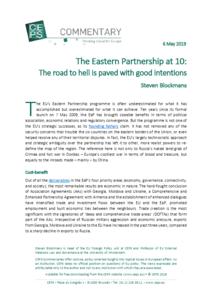 The Eastern Partnership at 10: The road to hell is paved with good intentions

The EU’s Eastern Partnership programme is often underestimated for what it has accomplished but overestimated for what it can achieve. Ten years since its formal launch on 7 May 2009, the EaP has brought sizeable benefits in terms of political association, economic relations and regulatory convergence. But the programme is not one of the EU’s strategic successes, as its founding fathers claim. It has not removed any of the security concerns that trouble the six countries on the eastern borders of the Union, or even helped resolve any of their territorial disputes. In fact, the EU’s largely technocratic approach and strategic ambiguity over the partnership has left it to other, more realist powers to re-define the map of the region. The reference here is not only to Russia’s naked land-grab of Crimea and hot war in Donbas – Europe’s costliest war in terms of blood and treasure, but equally to the inroads made – mainly – by China.

Out of all the deliverables in the EaP’s four priority areas (economy, governance, connectivity, and society), the most remarkable results are economic in nature. The hard-fought conclusion of Association Agreements (AAs) with Georgia, Moldova and Ukraine, a Comprehensive and Enhanced Partnership Agreement with Armenia and the establishment of enhanced dialogues have intensified trade and investment flows between the EU and the EaP, promoted employment and built economic ties between the neighbours. Trade creation is the most significant with the signatories of ‘deep and comprehensive trade areas’ (DCFTAs) that form part of the AAs. Irrespective of Russian military aggression and economic pressure, exports from Georgia, Moldova and Ukraine to the EU have increased in the past three years, compared to a sharp decline in exports to Russia.

The withdrawal from the GOST standards inherited from the Soviet Union and the adoption of modern EU technical product standards, the legal approximation to the Union’s acquis and the elimination of non-tariff barriers have contributed to economic growth in the countries and created long-term perspectives for modernisation and sustainable development. There is still a long way to go on the path to regulatory convergence. But with each step, the AA countries not only gain greater access to the 500 million strong EU single market; they also integrate into global value chains.

Delivering better governance and stronger connectivity has been a bigger challenge. Whereas reforms in homeland security and rule of law have earned the citizens of the three AA countries a visa-free travel regime that facilitates people-to-people contacts and cultural exchange, the governments need to rid their institutions and societies of corruption and oligarchic influences if they wish to tap the full potential of the new agreements with the EU. Georgia is often hailed as the best performer, but even its progress remains unsteady, as indicated by delays in the implementation of judicial reform and a vote-buying scandal during the 2018 presidential elections.

Designed as a political association, the EaP is intended to promote “democracy, stability, and resilience” in the partner countries and a safer neighbourhood for the EU. Ten years on, Ukraine has made considerable progress since its revolution of dignity, even if parts of the political class and the government remain captured by vested interests. The leaders of the velvet revolution in Armenia are slowly emerging from their honeymoon period, discovering that they lack substantial expertise and capacities to make good on their promises. Meanwhile, Moldova is experiencing a dramatic setback in its democratic credentials, with the pro-Russian Socialist Party having edged out its pro-EU rivals after years of massive corruption scandals. Efforts to improve respect for democratic principles and human rights in Azerbaijan and Belarus have been more like flogging a dead horse than establishing a genuine process. Supporters of the Eastern Partnership are discovering that the EU is not serious and/or is badly equipped to guide the transformation of partner countries towards becoming fully fledged democracies.

The EaP was intentionally framed as a political association, which naturally created externalities – both good and bad. Although the stated goal was to offer “everything but the institutions”, the EaP was perceived, by the Kremlin and in partner countries alike, as a first step toward EU membership.

Yet, absent agreement on the finalité of stronger relations with the eastern neighbours, the EaP’s aim of strengthening the resilience of the six countries’ institutions and societies remains in suspended animation. The application of an enlargement ‘lite’ methodology soon reaches its limits in countries for which EU accession is not on offer. With sustained effort and resources, the EU’s technocratic approach will probably result in plodding progress, albeit with fits and starts due to its vulnerability to domestic resistance and exogenous forces.

The second strategic flaw from which the Eastern Partnership suffers is that EU member states have been unwilling to beef up their support for hard security – witness the deafening silence that met President Poroshenko’s request for an EU peacekeeping force on the contact line in Donbas. The EaP offers support for energy security, integrated border management, cyber security and security sector reform of a civilian kind. But all of this is too little too late.

This leads into the third strategic flaw: the EU has no idea how to extricate itself from the strategic competition in the shared/contested neighbourhood with Russia. Russia declined the offer of membership of the European Neighbourhood Policy back in 2003. Yet, the EaP did not learn the lesson from the 2008 Russo-Georgian war, when the Kremlin provoked President Saakashvili to the point where he offered Moscow the excuse to invade Georgia temporarily. Russia thus aggressively defended its interests in the region, notably by blocking any prospects of NATO’s further expansion at its border. Ukraine ended up paying an even higher price once the Kremlin realised that the Association Agreement that President Yanokovych had been negotiating as part of the EU’s Eastern Partnership entailed a strategic reorientation away from the historic Kyiv Rus.

The EU will have to tackle these strategic challenges it if wants to celebrate the 20th anniversary of the Eastern Partnership, but it cannot compromise its own values and the security and socio-economic progress of its eastern neighbours.

The outcome of next week’s celebratory summit in Brussels is expected to be limited. It comes less than two weeks before the elections of the European Parliament, which are followed by the appointment procedures of the next President of the European Council, High Representative and European Commissioners. No full-blown review of the ENP/EaP should be expected before the end of 2020. Until then, the EU will focus on the 20 deliverables to which the partners have committed themselves. Yet, that should not keep us from thinking ahead. After all, the road to hell is paved with good intentions.

The first priority should be to make sure that the DCFTAs become a visible success. This is a moral obligation, given the high price the DCFTA countries have paid for this partnership. If the DCFTAs do not deliver the promised economic benefits to a wide cross-section of the population, they will lead to a weakening of pro-EU sentiment. This is also a strategic objective: it is important to prove to other countries in the region that increased cooperation with the EU pays off. The EU will therefore have to advance its agenda of low politics by upgrading the content and operational impact of the Association Agreements (AA+).

The second priority should be to turn the Eastern Partnership region into a connectivity hub for EU-China trade and investment flows, not just a conveyor belt for the Belt and Road Initiative (BRI). It is in the EU’s eastern neighbourhood that ‘normative power Europe’ meets the BRI’s western investment juggernaut. It is vital for all involved that merchandise can travel safely and without major frictions through the Eurasian space. Through the infusion of ‘soft connectivity’ (i.e. a legal architecture premised on the approximation of high quality standards and an agreement on the modalities of international dispute settlement), investment in ‘hard connectivity’ (road, rail, ports, and other infrastructure works) could be better guaranteed. Connecting the Chinese and European markets should also benefit the Eastern Partnership countries en route as full beneficiaries of a two-way street in trade and investment. Trade breeds stability. Georgia is in a privileged position, not just geographically on the south Caucasian rail and road corridor, but also having concluded a FTA with China on the back of its DCFTA with the EU. Enter the EU-China Connectivity Platform: alive since 2012, it now has a real opportunity to prove its worth.

Russia and the Eurasian Economic Union are quietly adopting EU standards to replace lower level and outdated GOST standards, which makes it easier to plug and play. Further trade cooperation could be used as additional “bait” to render Russia less belligerent. Russia will not benefit from standing idly by. The Chinese have an interest in constraining their primary strategic partner’s aggressive stance in its ‘near abroad’ so as to prevent seeing investment plans like that of the deep-water port in Crimea being laid to waste by Russia’s interventions in EaP countries.

The third priority should therefore be to extinguish the fires of the past years. This not only requires action at the geopolitical level. At grassroots level, EaP initiatives must encourage interethnic/intercommunal contact and work with local power-brokers and youth in order to build stability and resilience.

Finally, the EU should enhance the Eastern Partnership’s symbolic value by upgrading its multilateral dimension. Appreciated for its civil society and business forums and for providing a political communication platform between otherwise rather disparate countries, allowing the laggards (i.e. the governments of Azerbaijan and Belarus) to show off towards their own citizens, the EaP could develop more concrete joint projects for the socio-economic benefit of the region. The European School in Tbilisi serves as a flagship project and perhaps even as a tool to increase local ownership of change management in the mid- to longer term. The EU could even experiment with EaP+ working groups to explore selected areas of engagement with Central Asia, whose countries are in the process of enhancing their PCAs with the EU, China and Russia.

Tackling these challenges must be high on the to-do-list in the coming decade if the Eastern Partnership is to continue to generate mutual benefits for the EU and its eastern neighbours.