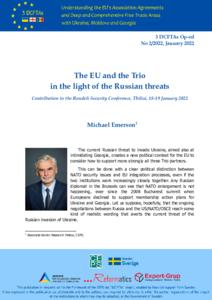 The current Russian threat to invade Ukraine, aimed also at intimidating Georgia, creates a new political context for the EU to consider how to support more strongly all three Trio partners.

This can be done with a clear political distinction between NATO security issues and EU integration processes, even if the two institutions work increasingly closely together. Any Russian diplomat in the Brussels can see that NATO enlargement is not happening, ever since the 2008 Bucharest summit when Europeans declined to support membership action plans for Ukraine and Georgia. Let us suppose, hopefully, that the ongoing negotiations between Russia and the US/NATO/OSCE reach some kind of realistic wording that averts the current threat of Russian invasion of Ukraine.

On the other hand, EU integration for the Trio is a much more elastic and open question. Under these conditions, how should the EU develop its policy towards the Trio? It should surely have a more explicit and positive overall content, but also be tailored to the specifics of the three states. General issues are discussed first, and then something on each of the Trio states individually.

1. There are current initiatives to be built on, including deepened sectoral integration, notably in relation to the Green Deal and Digital transformation, and the best feature of the recent Eastern Partnership summit, namely organisation of both EU and IFI funding of flagship projects.

2. These and other desirable projects could receive increased funding, giving clearer and more substantial meaning to the ‘more for more’ slogan.

3. A more novel development move would be to provide for progressive participation in the EU institutions step by step, including in various Council bodies without voting rights, with MPs delegated to the European Parliament, etc. Political dialogue between the EU and the Trio should see the Trio states to unifying their requests and subjecting each other to peer review to curb any policies undermining the reputation of the Trio project.

4. More radically the EU should be revising both its enlargement and neighbourhood policies. A more constructive system of incentives is needed, replacing current realities under which requests by the Trio for membership perspectives are simply denied by the EU. A bit more detail is needed for this to be clear.

A revised system should keep the present Article 49 of the Lisbon Treaty entitling any European democracy to apply for membership. But the accession process should be redefined with a set of stages assuring progressive integration conditional on political and economic criteria.1 Crucially there should be a penultimate stage in which the candidate state would have qualified for full membership, and would be fully included in all EU policies, funding and institutions, with just two exceptions: no veto powers in the Council and no member of the Commission. This would be to respect the concerns of present member states that further enlargement should not threaten the functionality of the institutions. It would continue until the EU had reformed itself with regard to the two exceptional issues, i.e. curbing veto powers and reforming the Commission in line with the not-yet implemented Lisbon Treaty provision (Commissioners to number only 2/3rd of the number of member states). At this point, the distinction between the penultimate stage and conventional membership would be ended. Encouragingly, the leaders of France, Germany and Italy are already now calling for more qualified majority voting, meaningless veto powers.

Ukraine. While Zelensky’s leadership is somewhat shaky, there is an important bedrock of EU integration policies underway, going beyond the Association Agreement and DCFTA. A major example is the plan to approximate the EU’s Green Deal, with transformative economic and societal implications. This will be extremely expensive, and becomes a prime candidate for the ‘more for more’ treatment.

Moldova. The Sandu presidency and new government have won well-founded plaudits for their impeccably democratic transformation of the Moldovan political system, aimed at profound reform starting with the judiciary. At the same time the economy is very fragile and struggling with the dual crises – Covid and energy supplies, already before the current Russian threats to peace in Europe (even if the latter do not target Moldova explicitly). The EU has already helped to finance imports of gas at much increased prices from Russia, and further conditional support is warranted.

Georgia. Unfortunately, Georgia has become the politically most controversial of the Trio partners, because of decisions widely criticized both at home and in the EU for being undemocratic. The government has now a reputation for delivering ‘bad surprises’ in the form of decisions that the leadership must have known to conflict with European democratic values. The most important for the EU was the intended reneging on electoral commitments made in the agreement of 19 April with EU President Charles Michel; the most recent concerns the abolition of an independent inspectorate. These decisions stand incongruously alongside continuing speeches by the leadership about the intention to submits a formal application for EU membership in 2024. The pity of it is that Georgia scores so well in many policy fields under the DCFTA.

What could be done to get Georgia back on the rails?

First, since trust with the EU has been broken, it needs to be re-established, if not the credibility of the Trio is also damaged. There are ample opportunities and formats for political dialogue available at all levels. What is needed to begin with is at least a discrete understanding that there will be no more ‘bad surprises’. More precisely there could be an understanding that when the government might be considering decisions that risk being criticized as contrary to European political values, the topic should be tabled for ‘political dialogue’ before such decisions are taken and announced, to see whether bumps in the road can be smoothed out in a spirit of constructive dialogue.

Second, it could be a good idea for Georgia to reformulate its intended 2024 application for membership broadly along the lines advocated above for a staged accession process (point 4). The present formulation was hardly considered credible even before the recent ‘bad surprises’, and not only for Georgian reasons. The EU itself was, and still is, stuck in a negative position over ‘membership perspectives’ without creating other positive perspectives. The Trio states together could formulate together a common understanding that, while they see the conventional enlargement process is on hold pending internal EU reforms, they could help engineer a new integration dynamic by endorsing the idea of a staged accession process.