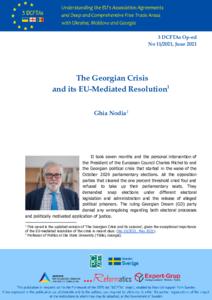 The Georgian Crisis and its EU-Mediated Resolution

This op-ed is the updated version of ‘The Georgian Crisis and its Lessons’, given the exceptional importance of the EU-mediated resolution of the crisis in recent days. (No 10/2021, May 2021).

It took seven months and the personal intervention of the President of the European Council Charles Michel to end the Georgian political crisis that started in the wake of the October 2020 parliamentary elections. All the opposition parties that cleared the one percent threshold cried foul and refused to take up their parliamentary seats. They demanded snap elections under different electoral legislation and administration and the release of alleged political prisoners. The ruling Georgian Dream (GD) party denied any wrongdoing regarding both electoral processes and politically motivated application of justice.

Domestic and international observers noted a number of irregularities during elections but did not contend that they influenced the overall result. International friends of Georgian democracy were unanimous in chastising the opposition for a rash decision to boycott Parliament. However, in February, the government’s decision to storm the headquarters of the United National Movement (UNM), the largest opposition party, and arrest its leader, Nika Melia, led to international outrage and prompted Charles Michel to intervene.

After several weeks of difficult negotiations and consultations carried out by Michel and, later, his representative, Ambassador Christian Danielsson, a compromise document was drafted. It provided for the release of alleged political prisoners and opened the possibility of early parliamentary elections if GD failed to get more than 43 percent in the municipal elections this October. It also included provisions related to reforms in electoral legislation, administration, and the justice system. On April 19th GD and a number of the opposition parties signed the agreement; however, the UNM refused to sign it until its leader, Nika Melia, was released from prison.

The latter issue caused the crisis to drag on for more than another month. It was the legal mode of Melia's release that proved the sticking point. The case against Melia was related to the latter allegedly leading an assault on the Georgian parliament building on the night of June 20, 2019, that led to a violent dispersal of the protest rally. GD meant to release Melia by producing amnesty for all those involved in that night’s events. This would also imply amnestying policemen and civil servants responsible for alleged abuses of power during the dispersal of the rally. This caused outrage among many activists, including those who consider themselves victims of the allegedly illegal application of force. Melia said he would not accept freedom at this price.

EU helped to find a way out of the impasse on this stage as well: on May 8th, it posted bail for his release; Melia left prison two days later. This was not the end of the story, however: many UNM supporters still thought that it was wrong to join Parliament unless the government fully satisfied the opposition demands, and the party leadership did not want to ignore them. It was not until May 30th that the Political Council of the UNM decided that its MPs would take their seats in Parliament. It still refused to sign the Michel document due to the amnesty clause, apparently in an effort to placate its radical wing.

What were the results of, or lessons learned from the crisis? As compromises go, neither party is fully happy; both had to make some concessions, though both can claim some achievements. In the government narrative, the opposition was forced to renounce its unreasonably radical stance and join Parliament; the opposition claims that the boycott worked because without that the ruling party would not release political prisoners and open a reasonably realistic path to early elections. However, most observers agree that by its procrastination, the UNM partly devalued the fruits of that victory.

Even though the core issue of the Parliament boycott is finally resolved, it would be too much to presume that Georgian politics are back to normal. Exceptional polarization, aversion to compromise solutions, as well as deep public distrust towards the institutions such as the courts and the electoral administration run too deep. There is no guarantee that the coming municipal elections do not lead to another crisis of some kind.

It would be great to believe that the parties drew a lesson for themselves that being obdurate and ignoring the other party’s perspective is counterproductive and it’s wiser to look for a compromise. But the rhetoric of the ruling party as well as most of its opponents does not allow for that. On the contrary, most active supporters of both sides still appear to give preference to the "all or nothing" approach.

The central role that the EU played in putting an end to the crisis might have been its most striking feature. It demonstrated that the EU is an even more powerful actor in Georgia than we had thought before. Beyond any doubt, without Charles Michel’s intervention, the crisis would not have been resolved. Before his visit on March 1st, the government narrative was that it had exhausted any possibility of dialogue with the “criminal” opposition and that, after all, there was really no crisis to talk about. After two tiny parties got convinced to enter Parliament, all democratic formalities were considered satisfied and the case was pronounced closed.

On the other hand, the issue came very close to developing into a general crisis in relations between Georgia and the EU. When, even after Michel’s visit, the positions of the parties remained intractable, influential European politicians mentioned a possibility of the EU using sanctions or, in a milder language, the mechanisms of conditionality with regard to Georgia. Natalie Sabanadze, Georgia’s very competent ambassador to the EU, resigned, obviously disappointed about her government’s behaviour; later she said to Le Monde that it was not sufficient for Georgia’s leaders to say they were pro-European, they had to act accordingly as well.

In the end, a crisis in EU–Georgia relations was prevented, but the episode revealed a wide mental gap between European politicians of different political persuasions on the one hand and both parties to the Georgian conflict on the other. The Europeans could not comprehend why the Georgian opposition immediately chose a nuclear option of boycotting parliament, even though it could not present a convincing case that the scope of violations was broad enough to determine the final result of the elections. It was also hard to understand what exactly the opposition hoped to achieve: with Georgians not showing any appetite for street protests, how could they pressure the government into calling snap elections? On the other hand, the Georgian opposition and a large part of the public considered westerners naïve when they urged them to “work through the institutions”: cannot they see that those institutions (like the courts and the electoral administration) are captured by Bidzina Ivanishvili, the country’s effective ruler?

Arguably, the EU found an even broader gap in understanding when dealing with the GD government. It was the latter’s decision to arrest the leader of the UNM, Nika Melia, that triggered the crisis. The European (and generally Western) reaction was that a country with at least a promise of a democratic future was taking a turn towards a more blatant Eurasian-style authoritarianism. Europe had to intervene before it was too late.

So, on the balance, was this crisis a good thing or a bad thing? Most importantly, Georgia showed itself as a place where the soft power of the EU can still make a considerable difference. Even though for months, the situation looked hopeless, eventually the Georgian political elite understood that it could not afford to be held responsible for a general deterioration in EU-Georgia relations. Georgia may not have made a step towards democracy, but a development away from democracy was prevented.

On the other hand, we also saw that Georgian politicians cannot talk to each other unless a high-level western diplomat is in the room. This has been so for a while: the previous agreement last March, related to electoral legislation, was also achieved exclusively due to the mediation carried out by western diplomats. If the government makes concessions, this is not because it listens to its own public, but because it gives in to the western pressure. It is good that Georgian political leaders still listen to “adults in the room”, represented, at different times, by Europeans or Americans, instead of following advice or examples provided by their authoritarian neighbours; but it would be even better if they learn to resolve their problems on their own.