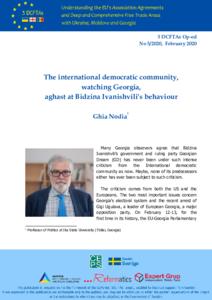 Many Georgia observers agree that Bidzina Ivanishvili’s government and ruling party Georgian Dream (GD) has never been under such intense criticism from the International democratic community as now. Maybe, none of its predecessors either has ever been subject to such criticism.

The criticism comes from both the US and the Europeans. The two most important issues concern Georgia's electoral system and the recent arrest of Gigi Ugulava, a leader of European Georgia, a major opposition party. On February 12-13, for the first time in its history, the EU-Georgia Parliamentary Committee failed to adopt a joint statement. This is a sign of a crisis in relations between the EU and Georgia.