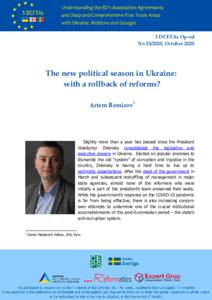 The new political season in Ukraine: with a rollback of reforms?

Slightly more than a year has passed since the President Volodymyr Zelensky consolidated the legislative and executive powers in Ukraine.  Elected on popular promises to dismantle the old “system” of corruption and injustice in the country, Zelensky is having a hard time to live up to optimistic expectations. After the reset of the government in March and subsequent reshuffling of management in major state agencies, almost none of the reformers who were initially a part of the president’s team preserved their seats. While the government’s response on the COVID-19 pandemic is far from being effective, there is also increasing concern over attempts to undermine one of the crucial institutional accomplishments of the post-Euromaidan period – the state’s anti-corruption system.