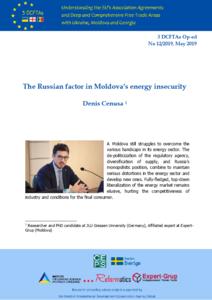 A Moldova still struggles to overcome the various handicaps in its energy sector. The de-politicization of the regulatory agency, diversification of supply, and Russia’s monopolistic position, combine to maintain serious distortions in the energy sector and develop new ones. Fully-fledged, top-down liberalization of the energy market remains elusive, hurting the competitiveness of industry and conditions for the final consumer.

Internally, the energy system suffers structurally from the poor administration of energy-related public enterprises, and above all from lack of progress in increasing the regulator’s independence from political interferences. Though the legislation has been brought into line with many of the requirements of the Third Energy Package, this is not fully reflected on the quality of implementing procedures. For instance, contrary to the Energy Law of 2017, politically associated officials joined the energy regulatory agency during 2018-19 in a poorly transparent and a non-merit based selection. Some clear deviations from the procedures were also noticed in the tenders for yearly electricity purchasing between 2017 and 2019, during which the Ministry of Economy favored the state-owned company Energocom against other bidders. Another aspect concerns the opacity of the negotiations on price for MW/h and the share of electricity imports between Energocom with the MGRESS power plant, based in the Transnistrian region, and the Ukrainian DTEK that belongs to the Ukranian oligarch Rinat Ahmetov. These issues have been underlined by European observers for third years in a row, but are not entirely addressed by the Moldovan authorities.

There are also externally fueled pressures.

Firstly, Moldova’s gas contract with Gazprom expires at the end of 2019, without any clarity yet about the future contractual commitments. So far, the authorities planned to prolong the contract dating from 2006, because this is beneficial to Moldova, mostly due to the low costs of the oil, which is counted in the gas price formula. However, the price for gas has increased by 25% in early 2019 compared to 2018, reaching 237.46$ per 1000 m3 (Mold-Street, 15 March 2019). During the recent electoral campaign, the Socialists promised to reduce by 25% the price for Russian natural gas. The President, Igor Dodon, discussed this opportunity with Gazprom. A presumed condition to obtain gas price discounts, albeit lately refused by Russia to Armenia and Belarus, would be to join the Eurasian Economic Union, to which Moldova already gained observer status in May 2018 (IPN, 22 May 2018). The uncertainty of post-electoral discussions on forming the government, and thus high probability of early elections, compromises the negotiation of even a further extension of the current contract.

Secondly, the diversification of supply pipelines from Romania has hardly advancing until the end of April, when the start of the construction was announced for early May. The Romanian state-owned company Transgaz that privatized in 2018 the first segment of the section of the interconnector on Moldovan soil, has faced technical and bureaucratic shortcomings. This has delayed the beginning of construction of the interconnector in Moldova. Further, decisions of the Romanian government adopted in 2018-19 have affected the private investments in the exploration of gas in the Black Sea offshore, induced limitations on gas exports, and hurt the liquidity of state-owned energy companies, including Transgaz. Only by accessing EU financing will Transgaz be able to fulfill its contractual commitments to build the gas interconnector to Moldova’s main energy demand in Chisinau. Moreover the interconnector will become operational only if the Moldovan regulator ensures the access of third parties to the national gas network, currently dominated by entities indirectly associated with Gazprom.

Thirdly, the consumption of Russian gas by the Transnistrian region turns into Moscow’s biggest leverage on Moldova. The region receives gas within the terms of the 2006 Moldova-Russia gas deal, which covers supply, price and transit, and has been prolonged several times. The gas is supplied contractually to MoldovaGaz, the Moldovan state-owned company, but in which Gazprom has a 51% shareholding. Though Transnistria consumes each year about 2/3rds. of the natural gas (or approx. 2 bln. m3) supplied by Gazprom to MoldovaGaz it makes no payment to either MoldovaGaz or otherwise to Gazprom. As a result, the total debt of Moldovagaz to Gazprom on account of Transnistria’s unpaid gas consumption has increased to over 6 bln. USD. In 2017, Moldova made the very reasonable proposal to separate the gas debts of Transnistria from the obligations of MoldovaGaz under a debts restructuring scheme, since the unpaid gas amounts to Russia’s implicit subsidy to keep the Transnistrian regime from collapse. However, Gazprom rejected this proposal. In his recurrent visits to Gazprom, the Moldovan president Igor Dodon has not challenged Moscow’s insistence that Moldova be accountable for the Trasnistrian debts. This gas debt issue may escalate sooner or later. Meanwhile, the Transnistrian region uses the lower costs of production, and in particular the unpaid gas, to sustain its exports, up to 65% of which goes to the EU (3DCFTAs, 28 March 2019), or for electricity production sold to the Moldovan consumers.

The energy sector of Moldova is so problematic, but also vital, that it requires special attention from its external partners, notably the EU. In particular there has to be a professionalisation and de-politicisation of the energy regulator, completion of the interconnector with Romania and help in finding solutions to the gas debt issue.