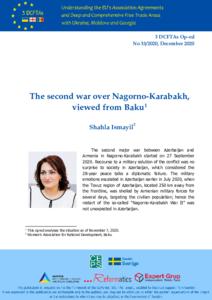 The second war over Nagorno-Karabakh, viewed from Baku

The second major war between Azerbaijan and Armenia in Nagorno-Karabakh started on 27 September 2020. Recourse to a military solution of the conflict was no surprise to society in Azerbaijan, which considered the 28-year peace talks a diplomatic failure. The military emotions escalated in Azerbaijan earlier in July 2020, when the Tovuz region of Azerbaijan, located 250 km away from the frontline, was shelled by Armenian military forces for several days, targeting the civilian population; hence the restart of the so-called “Nagorno-Karabakh War II” was not unexpected in Azerbaijan.

Moreover, it is believed nationally that the timing for war was strategically well selected, when the world was busy with the C-19 outbreak and U.S. elections. The immediately introduced martial law and overall disconnection from the internet left little space for national audience’s active participation in the political discourse; the social and media platforms were mostly disabled, limiting the access of Azerbaijani political and civil society as well as the ordinary public to information and exchange.

Meanwhile, the C-19 figures in the country was continuing to grow in the previous weeks, reaching over 1,400 newly infected people per day. For comparison, in March-April 2020, the country switched to the lockdown regime with only 30 newly infected people per day. Azerbaijan stopped the work of  educational facilities from 19 October 2020 and fully switched to online education ever since. Shopping malls, entertainment centers and public gathering places remain closed since the first lockdown; the metro was re-closed in October. The healthcare facilities remain overbooked with both C-19 infected people and the wounded from the war. Other categories of patients are largely underserved, and the lack and expense of international flights make them solve their healthcare issues domestically.

There are plenty of personal, emotional, political and historical aspects involved in this conflict, that definitely influence people's perspectives and viewpoints. However, Azerbaijani society demonstrated an unprecedented solidarity and support to the government over the Nagorno-Karabakh II war. The slogan “#GarabaghisAzerbaijan” [Karabakh is Azerbaijan] united all stakeholders in the country (government, political opposition, civil society, mass media, academic institutions, business sector) and diaspora migrants living beyond the country borders. Very few “anti-war” voices were mostly silenced through public reproaches. The response to formal tweets on frontline updates with subsequent street celebrations has dominated the festive mood in the society through last few weeks, despite the heavy human losses on the frontline.

Azerbaijan has a long track of poor human rights records, corruption and rule of law, and the situation with civil society and free media still leaves much to be desired. Yet, given the unprecedented solidarity in the country there is a sort of temporary unwritten “internal ceasefire” not to distract the attention to any other topic outside of Nagorno-Karabakh war. The cause of justice for 1 million IDPs and refugees from the early 90s was intensified during the period, with emotional solidarity escalating in the light of continuous and systematic military attacks and shelling of Azerbaijani territories, which are located outside the war zone and Nagorno-Karabakh area, like Ganja, Mingechevir, Tovuz, Yevlakh, Agstafa, Samukh, Naftalan, Ujar, Khizi. SCUD ballistic missiles, which have great destructive power, were fired into the densely populated area of Ganja, the second-largest city in Azerbaijan, from the territory of Armenia in September 2020. This was the first case in the OSCE area that a SCUD missile was used against civilians outside war zones, and in general a rare case observed in recent military conflicts around the world. As a result of these illegal acts, 7 of 13 strategic administrative regions of Azerbaijan, with oil pipelines and energy infrastructures, were affected by the recent military acts of the Armenian government. Over 150 civilians died and over 500 civilians were wounded in Azerbaijan. Public activists collect donations and humanitarian aid to support the families whose houses were destroyed, to cover main needs.

The military narrative of the President Ilham Aliyev severely intensified since the escalation of the conflict in the summer of 2020. His uncompromised standpoint towards the liberation of every “single centimeter” of the Nagorno-Karabakh territory and the surrounding 7 occupied regions of Azerbaijan was loud and strict. The new trend of the period was the abundance of interviews by President Aliyev to international media outlets, when he continued to defend the strict standpoint of the government for territorial integrity, as an uncompromised position in all times and formats. Another peculiarity was the unusual visibility of several senior officials, including Hikmet Hajiyev (assistant to the President) and Jeyhun Bayramov (Minister of Foreign Affairs), which improved the legitimacy of the authorities domestically. Quite a few efforts were made by the Azerbaijani government to communicate with the senior representatives of the diplomatic and international community over the Nagorno-Karabakh issue. For instance, international non-governmental organizations, such as Human Rights Watch, Amnesty International and others managed to access Azerbaijan to conduct the fact-finding missions on the usage of cluster munitions by Armenia. Similarly, the ambassadors and military attaches of main diplomatic missions were taken to Ganja and Mingechevir to witness the shelled houses of the civilians.

A paradigm shift during the Nagorno-Karabakh War II was strongly observed since the initial escalation. Russia, which was always backing up Armenia with political and military support, demonstrated its formal “neutrality” in this period and called for an immediate end to the violence and for talks to stabilize the situation, yet the reports on military and humanitarian aid by Russia to Nagorno-Karabakh was repeatedly reported in mass media of Azerbaijan. Meanwhile, Turkish President Recep Tayyip Erdogan openly pledged support for Azerbaijan, and Turkey’s support was taken very positively and naturally in both Turkey and Azerbaijan, given its historic foundations.

The European Union immediately issued a statement calling for an immediate cessation of hostilities, de-escalation and for strict observance of the existing 1994 ceasefire; while France, which is one of the formal parties of the OSCE Minsk Group demonstrated open support for Armenia, which leads to certain tension in bilateral relations between Azerbaijan and France.

Overall, the Nagorno-Karabakh conflict proved that protracted conflicts can be as dangerous as ongoing ones, and more efforts should be made for undertaking all the steps necessary for peaceful negotiations and non-military solutions. It is believed in Azerbaijan that peaceful and sustainable solutions are still possible for both the finalization of the war and the post-war period. Yet, everyone understands that reconciliation between the countries is going to be determined with progress over the  domestic human rights and democracy agenda too. For example, the involvement of the civil society, among key stakeholders, is envisaged to contribute to the required process of substantial reforms within the country and a subsequent qualitative change in the current political regime.