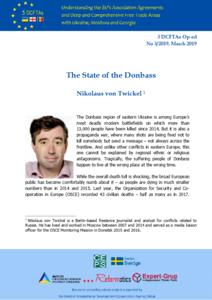 The State of the Donbass

The Donbass region of eastern Ukraine is among Europe’s most deadly modern battlefields on which more than 13,000 people have been killed since 2014. But it is also a propaganda war, where many shots are being fired not to kill somebody but send a message – not always across the frontline. And unlike other conflicts in eastern Europe, this one cannot be explained by regional ethnic or religious antagonisms. Tragically, the suffering people of Donbass happen to live at the wrong place at the wrong time.

While the overall death toll is shocking, the broad European public has become comfortably numb about it – as people are dying in much smaller numbers than in 2014 and 2015. Last year, the Organization for Security and Co-operation in Europe (OSCE) recorded 43 civilian deaths – half as many as in 2017.

While military violence is almost always an unnecessary evil, this one is particularly bizarre in that it occurs with little or no military value. Since the signing of the Minsk Package of Measures in February 2015 (“Minsk II”), both sides have barely moved an inch over the “Contact Line” agreed with French and German help in the Belarusian capital.

Instead, Eastern Ukraine has become a battleground for information warfare. The shootings and killings serve political purposes – the sides want to keep the status quo in order to avoid the agreement’s unsavoury political parts. They may also want to signal the outside world that they are being under attack and convince their domestic audience to put up with wartime constraints.

As the military dimension has receded, the clash of narratives has grown disproportionately. Ukraine is eager to tell the world that it is fighting Russia, who has attacked, invaded and occupied parts of the country since the annexation of Crimea in 2014. For Russia and its proxies in Donbass, there is a civil war in eastern Ukraine. While plenty of evidence has been collected that proves Ukraine right and Russia wrong, the two “People’s Republics” set up in Donetsk and Luhansk serve the purpose of engineering a civil war which would never have broken out without them.

Donetsk and Luhansk are far from being Ukraine’s only Russian-speaking areas. People in Kharkiv, Dnipro, Odessa and even Kiev speak Russian without identifying with Russia. Separatist movements failed, notably in Kharkiv, when local elites sided with the government. In Donetsk and Luhansk, the elites were initially undecided, while the proximity to the border with Russia also played a role.

The purpose of these quasi-states outside Ukraine’s control and entirely dependent on Russian support is clearly to keep the fire simmering without burning down the house. Moscow is doing its best to cultivate anti-Ukrainian sentiment and foster pro-Russian views inside Ukraine while claiming that it respects the Minsk agreement (at least the letter) by not recognizing the “Republics” – although it has recognized its documents in 2017.

Running the “People’s Republics”, on the other hand, has not proven an easy task. It took the Kremlin’s political machine years to contain infighting, corruption and insubordination among local elites. Numerous warlords were killed on the way, the most prominent being Donetsk separatist leader Alexander Zakharchenko, who died when a bomb exploded at his favorite café in August 2018. However, it looks like Zakharchenko’s corrupt clique was replaced by another.

There is a positive message in these difficulties. While Russia possesses more than enough military might to conquer territories in neighbouring countries, it does not necessarily have the power to keep them peaceful and stable. This might deter hardliners in the Kremlin from further military adventures.

However, the longer the “People’s Republics” exist, the harder their reintegration into Ukraine will become, a prospect that is aggravated by Kiev’s current counter-productive trade blockade of the separatist regions. This poses further risks of a higher and graver order. On the one hand, Ukraine might be prompted to retake them by force before it is too late, leading to outright war. On the other hand, Russia might be prompted to recognize and/or annex them. Assumed that there is no military solution, the best path for Ukraine is to become a stable and prosperous democracy that is the more attractive option for the population of the impoverished “People’s Republics”. This is what Kiev with Western policymakers should focus on.