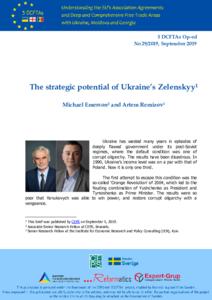 The strategic potential of Ukraine’s Zelenskyy

Ukraine has wasted many years in episodes of deeply flawed government under its post-Soviet regimes, where the default condition was one of corrupt oligarchy. The results have been disastrous. In 1990, Ukraine’s income level was on a par with that of Poland. Now it is only one third.

The first attempt to escape this condition was the so-called ‘Orange Revolution’ of 2004, which led to the feuding combination of Yushchenko as President and Tymoshenko as Prime Minister. The results were so poor that Yanukovych was able to win power, and restore corrupt oligarchy with a vengeance.