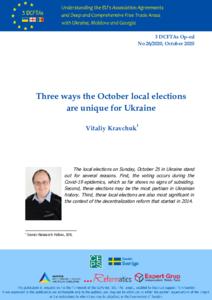 Three ways the October local elections are unique for Ukraine

The local elections on Sunday, October 25 in Ukraine stand out for several reasons.

First, the voting occurs during the Covid-19 epidemics, which so far shows no signs of subsiding. In Ukraine, the response to the outbreak is graduated regionally depending on the number of new cases and load on hospitals. Some of Ukraine’s largest cities, including Kharkiv, Chernigiv, Poltava, Khmelnytskyi, Chernivtsi, Sumy, Ivano-Frankivsk and Ternopil, are subject to the most severe “red zone” quarantine. Restrictions differ from region to region, but full or partial bans on the activity of public transport, education, tourism, sports, entertainment and nonessential retail are all on the table.

However, voting procedures are uniform throughout Ukraine. All voters that want to participate in the elections need to do it in person over 12 hours when polls are opened on October 25. There are no absentee or early voting provisions in the Elections Code. Only home-bound voters may request election officials to visit them on the Elections day so they can cast their vote. Voters and election officials will be required to wear masks, but some voters are likely to be discouraged from coming out to vote.

Second, these elections may be the most partisan in Ukrainian history. Under the recently approved Elections Code, only candidates from registered parties may stand for election in localities with over 10,000 voters. It will also be the first (and maybe the last) time when the new complicated rules for party lists will be tried out. On the one hand, it has aspects of a straightforward proportional representation system. Only parties with over 5% of the total vote will be represented in the council, and the total number of council seats for each party will be proportional to the number of votes.

On the other hand, the election rules also attempt to include voter preferences for individual candidates. That is where the complexity comes in. Each locality is divided into two to fourteen election districts depending on the number of voters. Parties may but are not obliged to designate some of their candidates for specific election districts. Each district would ideally be represented by ten council members in proportion to the party preferences of this district’s voters, but numbers may differ depending on turnout and vote distribution. Voters need to vote for a party for their vote to be counted and may also select council member from the preferred party. If enough voters support individual candidate, he will get council seat regardless of the order of the party list. Of course, rules required to accomplish this are not easy to understand for the average voter.

According to the monitoring survey by Rating Group done on 16-19 October, the top 3 parties with the highest chances to enter oblast councils are the presidential “Servant of People” getting 16.7% of votes among those who decided and is ready to vote, the pro-Russian “Opposition Platform – For Life” will get  (13.5%)  and “European Solidarity” headed by Petro Poroshenko (13.2%). Overall, five parliamentary parties are expected to attract a bit more than a half of votes in these elections. Other votes will go to national non-parliamentary or local parties. Over 20% of voters remained undecided two weeks before elections,

Third, these local elections are also most significant in the context of the decentralization reform that started in 2014. Over the last five years small local communities were encouraged to merge voluntarily until they were large enough to provide a certain basic level of service to their residents. As an incentive, newly amalgamated communities received increased financial resources and were put on equal footing with larger cities. There was also a threat of forced merger later in the future. Almost a thousand of newly amalgamated communities were created, but coverage was uneven.

The elections will put the new local government map into effect. Newly elected local councils will take over, and old local government structures will be dissolved. For most cities, the change will be limited to absorbing some of the neighbouring villages. Still, in many rural areas, the new elections will mark mergers with nearby towns or other villages. Some of the newly created amalgamated communities cover large areas that may make access to local services difficult. The five largest communities together cover 9,917 square km, an area that is larger than the island of Cyprus.

Summing up, before the election day voters will need to navigate through dozens of party candidates put forward under new and complex party-list election rules and a lot of campaign messaging on the national and local levels. Voters will also need to weigh infection risks against choosing who will lead their community over the next five years. After election day, the newly elected local councils will work in their new boundaries and potentially under changing rules for their relationship with other levels of government, since laws that define the powers and resources of the new local government units are still under consideration in the Verkhovna Rada.