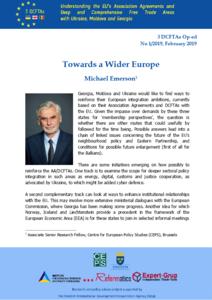 Towards a Wider Europe

Georgia, Moldova and Ukraine would like to find ways to reinforce their European integration ambitions, currently based on their Association Agreements and DCFTAs with the EU. Given the impasse over demands by these three states for 'membership perspectives', the question is whether there are other routes that could usefully by followed for the time being. Possible answers lead into a chain of linked issues concerning the future of the EU's neighbourhood policy and Eastern Partnership, and conditions for possible future enlargement (first of all for the Balkans).

There are some initiatives emerging on how possibly to reinforce the AA/DCFTAs. One track is to examine the scope for deeper sectoral policy integration in such areas as energy, digital, customs and justice cooperation, as advocated by Ukraine, to which might be added cyber defence. A second complementary track can look at ways to enhance institutional relationships with the EU. This may involve more extensive ministerial dialogues with the European Commission, where Georgia has been making some progress. Another idea for which Norway, Iceland and Liechtenstein provide a precedent in the framework of the European Economic Area (EEA) is for these states to join in selected informal meetings of the EU sectoral Councils. A further more ambitious idea might be accession to the EEA itself. Bundling some such ideas together might provide the basis to build on the AA/DCFTAs with second-generation Agreements, which might for example be branded as AA+.

To be sure such ideas, to be credible, would need to be based on a good record of implementation of the existing AA/DCFTAs, which would need more time still to be confirmed, notably following recent or imminent elections in all three states.

This leads on into the question how the European Neighbourhood Policy might be revised or better restructured in the light of the demise of the original ENP concept of some 15 years ago. Both East and South neighbourhood regions have broken into pieces, most drastically to the South. The East is split between the three AA/DCFTAs and the other three Eastern Partners, two of which joined the Eurasian Economic Union; yet the Eastern Partnership itself still has value. As for the South Mediterranean, the years since the Arab Spring of 2010 have tragically seen much convulsed in violence, terrorism and war, linking to migration crises. The few states that retain the objective of deeper relations with the EU, such as Morocco and Tunisia, have held exploratory negotiations for DCFTAs with the EU, yet without positive outcomes.

At the same time, the EU has been extending and deepening its set of economic policy instruments open to the participation of all European neighbouring states interested and willing to integrate more fully with the EU (e.g. common rules of origin in free trade, energy and transport policies, and much else). This provides the basis for developing what might be called a Wider Europe policy concept, to replace the obsolete ENP.

This would not be to prejudice the pre-accession processes of the Balkan states, while still recognising that in terms of current developments the Balkans have now in some respects to catch up with the advanced DCFTA model. But this also leads into the question of how and when the presently stagnating enlargement process might be credibly got back on track. One aspect of this question links to the quite impressive advances of the so-called ‘multi-speed Europe’, consisting notably of the euro, Schengen and defence domains. These actual or proposed systemic developments have variable geographic coverage, with all cases seeing less than all member states participating, leaving a ‘basic EU’ consisting mainly of the single market and the political processes of the institutions. As President Macron has hinted, such developments combined with some other reforms of the EU (e.g. extended qualified majority voting in the Council), might pave the way to resume the enlargement process.

Now is a good time for discussing such ideas, developed in more detail elsewhere, in view of the renewal of the European Parliament and Commission in the course of 2019. The AA/DCFTA states could well take advantage of this open political window to advance their own ideas into the debate.

In conclusion, it is suggested that a major debate be engaged around three linked propositions: