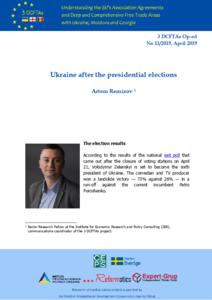 Ukraine after the presidential elections

According to the results of the national exit poll that came out after the closure of voting stations on April 21, Volodymyr Zelenskyi is set to become the sixth president of Ukraine. The comedian and TV producer won a landslide victory — 73% against 26% — in a run-off against the current incumbent Petro Poroshenko.

The preceding Friday had seen the one and only debate between the candidates, held in the country’s biggest sports stadium. The format of debates was far from a traditional studio-style session and more of a double campaign rally. Both candidates were exchanging various accusations rather than engaging in any real discussion on future policies. The main outcome was that Poroshenko was unable to use the opportunity to damage Zelenskyi on account of his inexperience.

Although the official results have yet to be announced, Poroshenko has accepted the defeat following the release of the exit poll results and congratulated the competitor offering him support and advice during the transition, as well as promising to pass on to Zelenskyi's team the network of international support built over the last five years. The same evening a number of the Western leaders, including Polish, French, EU, US presidents and NATO General Secretary, have called or issued short congratulatory statements to the president-elect. The next day those were joined by the head of governments of Canada, Germany, UK, while the EU issued a joint letter by the President of the EU and the President of the European Commission who reconfirmed the Union’s support of Ukraine's reform path stressing the crucial role of the implementation of the Association Agreement and DCFTA. Such a rapid international reaction signals that the country had successfully passed a democratic test amid the absence of major violations during the elections day. [1] It should be noted that Russia’s officials did not offer congratulations, and seem to view the prospects of cooperation with the new administration cautiously. Zelenskyi had commented that the electoral result showed that anything is possible in former Soviet Union states, which will not have amused the Kremlin.

Team and future policies: cat in the sack?

While the election results do not leave any doubt, the future policies of Zelenskyi remain an enigma. Having utilized citizens' dissatisfaction with the current establishment and not going too much into policy details during the campaign, the president-elect's team may have raised the public expectations too high. The representatives of Zelenskyi already try to enter the safe ground by stating that the issue of energy tariffs for population does not fall within the presidential mandate, and no one is able to end the war in the East just in a couple of days. At the same time, ‘Z-team’ announced the list of laws to be submitted to the parliament by Zelenskyi as soon as he steps into the office. It includes proposals on the extension of the rules of direct democracy, the removal of parliamentary, presidential immunity and the immunity of judges, the withdrawal of MPs and the law on impeachment. Also, Zelenskyi’s team advocates relaunching the National Agency for Prevention of Corruption (NAPC) that has been widely criticized by the civil society for its ineffectiveness, as well as the Specialized Anti-Corruption Prosecutor's Office (SAPO), or, at least, its head for a start. So at least Zelenskyi is signalling serious intent over anti-corruption policies.

Zelenskyi has not yet named candidates for positions of ministers for foreign affairs and defence, head of the security service, prosecutor general, nor even the head of the presidential administration. Indeed, he has presented a dozen experts who advise him on the various issues. Interestingly, some of those work at a think tank that is close to the current minister of interior affairs, Arsen Avakov, who seemed to pledge loyalty to Zelenskyi already before the first round of elections. However, it is unclear if any of those advisors will be nominated for a public office. In this regard, a journalist investigation found that Zelenskiy’s headquarters consists of four groups that are kept in a shadow. For example, one of them is led by the lawyer of the run-away oligarch Ihor Kolomoiskyi.

Given the absence of Zelenksyi's own party in the Rada, securing the support of the parliament constitutes one of the major challenges during the first months of his presidency. Although several MPs have already voiced their readiness to vote for legislative proposals of the newly elected president, it is likely that establishing working relations with the parliament will not be an easy task. Various parliamentary factions may find it beneficial to sabotage some of his initiatives in order to lower his public ranking and prevent his yet-to-be-developed party "Servant of the People" from gaining a substantial number of seats in the October parliamentary elections. Some anticipate that Zelenskyi will try to act in a French manner and force the dissolution of the Rada in order to capitalize on the current public support. However, Zelenksyi will be limited in time (around two-three weeks) since the parliament cannot be reset in the last six months of the term (starting from May 27). Also, the representatives of Z-team claimed that this option is not among the priorities of their leader at the moment.

It is only the beginning.

After winning in all the regions except Lviv oblast, Zelenskyi received an extraordinary mandate at least to fight corruption. Yet, it would be premature to say that the candidate has united the country. Firstly, this is because his election was consolidated around a negative rather than a positive agenda. Secondly, his support base is not homogenous, particularly when it comes to foreign policy issues such as EU and NATO membership. While declaring the commitment to European integration, Zelenskyi and his team have said nothing specific on how they will move Ukraine towards the EU and contribute to the implementation of AA/DCFTA. Moreover, even this humble support of the European integration was not actively voices, allowing him to attract also pro-Russian voters.

Zelenskyi’s voters may turn against their candidate quite fast if their expectations are not met. Moreover, he will be under rigorous public scrutiny given his ties to Kolomoiskyi. The latter is eager to get back the nationalized Privatbank, which would create risks for the country’s financial stability and cooperation with international donors. Before the second round of the election, a couple of Kyiv courts ruled in favour of Kolomoiskyi in several cases. In particular, the nationalization of the bank was announced illegal by one of the rulings. Although these court rulings will go through the appeals procedure, the whole process will pose hazards for the management of Zelentskyi’s reputation.

In sum, it is early to judge if the Zelenskyi's presidency is to succeed as a brilliant democratic breakthrough, or to become a tragic failure, or somewhere in between. What is already missing is the lack of communication by the president-elect with public: journalist, experts, civil society activists. Most of Zelenskyi's plans and clarifications on policies are voiced by the advisors while he is more eager to reach out to supporters via Instagram videos. It would be a pity if the virtual candidate turns into a virtual president.