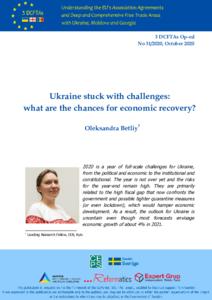 Ukraine stuck with challenges: what are the chances for economic recovery?

2020 is a year of full-scale challenges for Ukraine, from the political and economic to the institutional and constitutional. The year is not over yet and the risks for the year-end remain high. They are primarily related to the high fiscal gap that now confronts the government and possible tighter quarantine measures (or even lockdown), which would hamper economic development. As a result, the outlook for Ukraine is uncertain even though most forecasts envisage economic growth of about 4% in 2021.

The year 2020 started with declining industrial output primarily due to weaker external demand, while fiscal revenues were lower than planned because the stronger than expected hryvnia resulted in under-execution of VAT revenues on imports. The IMF program was on hold as the Parliament was stuck in a long procedure for approving the Land Law, with the need to consider 4000 proposals by the MPs to amend the Draft Law, and the debates on amendments to the Banking Law were still on-going. All this interacted with the change in the Cabinet of Ministers in the first days of March.

Already the first COVID-19 case had been registered, and in mid-March the Government introduced the lockdown. This was a hard hit for the economy and resulted in real GDP declining by 11.4% in the second quarter of 2020. The full-scale lockdown lasted until mid-May, after which it was gradually softened. To mitigate the negative impact of the lockdown the Government introduced partial unemployment payments, cash benefits for self-employed individuals with children, and payments to elderly pensioners. It also conducted earlier than initially planned the indexation of pensions. Credit vacations were made possible, and SMEs received access to cheaper credits subsidized by the government.

At the end of July quarantine measures were introduced with green, yellow, orange, and red regional zones. However, business quarantine measures were rather soft even in red quarantine zones due to the risks of social tensions and opposition from local authorities. Overall, most businesses started working almost as usual. Retail trade increased against the background of rather strong consumption, which was also supported by the minimum wage increase from UAH 4723 to UAH 5000 in September 2020. State financing of infrastructural projects, primarily of roads construction and maintenance, also contributed to economic recovery with financing from the government’s COVID-19 Fund. As a result, most sectors showed improvements in their performance. However, agricultural output declined due to lower harvests, and passenger transportation remained depressed because of restrictions on travel. Consumer price inflation was below than the lower bound of the inflation target, partially due to the increased credibility of the central bank, which contained inflationary expectations. The current account balance turned positive due to a narrowed trade deficit and an improved surplus of trade in services. In particular, external demand for food and metallurgical product exports remained strong, while imports declined due to lower energy prices, smaller domestic demand, and the drop in tourism.

In November 2020, the risks of another lockdown rose again due to the surge in COVID-19 incidence and lack of adequate capacities of the health system. If introduced it would result in another decline in economic activity, after it started to recover in summer, and real GDP might then drop by more than currently expected 5.5-6.0% for the year 2020 as a whole. The impact of the lockdown might be aggravated by the lack of adequate government mitigation measures. As a result, on 12 November the government changed the quarantine measures, defining all of Ukraine as an orange zone, and introduced weekend lockdown with red zone restrictions.

The government has also promised to renew some measures for business support, which were used in spring, which might be a challenging task. In particular, the government currently faces a large fiscal gap due to high financing needs against the background of limited access to domestic and external capital markets. Considering possible savings on the expenditure side and likely increases in fiscal revenues, the fiscal gap is estimated at about USD 3.5-4.0 bn. The fiscal deficit was expected to be covered primarily by concessional lending, including the second tranche of loan under the IMF program.

However, the IMF program is currently on hold as the government has not yet fulfilled several structural benchmarks required for the next tranche. Moreover, the draft State Budget Law for 2021, which was voted in the first reading by the Parliament, does not reflect Ukraine’s commitments under the IMF program. Ukraine also suffers a constitutional crisis, as the Constitutional Court decisions had somewhat reversed anti-corruption reforms, undermining achievement of essential structural reforms.

To ensure access to financing there is an urge for MPs to approve laws required under the IMF program (namely, amendments to the Laws on High Council of Justice, Deposit Guarantee Fund, and Banking Law) as well as resolve the constitutional crisis and restore anti-corruption legislation. This is a challenging task as members of the presidential party ‘Servants of People’ is rather fragmented at the moment.

IMF engagement is important not only for the closing the fiscal gap in 2020 but will be even more critical for securing financing needs (at about 15% of GDP) in 2021. It should also open the floor for other concessional lending, including the macro-financial assistance from the EU and the World Bank. Besides, the active IMF program improves conditions for government borrowings on domestic and external markets to finance on time and in full its liabilities.

The forecasts of the Cabinet of Ministers and the central bank, as well as of key Ukrainian and foreign experts, base their economic forecasts for 2021 on the assumption of a continued IMF program. There is a consensus among forecasters that real GDP should grow by about 4% next year (with a somewhat more pessimistic IMF forecast of 3%). The growth is assumed to be due to stronger private final consumption supported by two planned hikes in the minimum wage to UAH 6,000 in January and UAH 6,500 in July, and a further increase in pensions. At the same time, this would contribute to inflation, which is expected to temporarily exceed the central bank’s inflation target (the central bank forecasting consumer prices to accelerate to 6.5% in 2021). The minimum wage increases will somewhat limit private investments. Still, the government plans to keep a strong level of infrastructural spending, with further focus on road construction, which would support economic activity. The current account balance is expected to return to deficit due to broadened trade deficit as the growth of imports is expected to outpace exports. Moreover, the expected access to vaccination should result in higher expenditures on tourism.

Overall, Ukraine’s economic recovery depends on political continuity in the reform implementation, credibility of the central bank, and the capacity of the government to resolve the constitutional crisis. This would ensure the IMF’s support and, thus, open access to other concessional lending and improve conditions for state borrowings. Judicial reform, which is one of the structural benchmarks of the IMF program, should result in a better investment climate and inflow of foreign direct investment required for the acceleration of economic growth in the longer run.