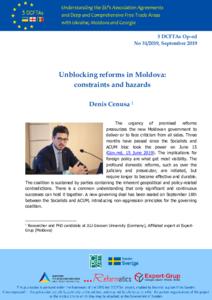 The urgency of promised reforms pressurizes the new Moldovan government to deliver or to face criticism from all sides. Three months have passed since the Socialists and ACUM bloc took the power on June 15 (Government of the Republic of Moldova, 15 June 2019). The implications for foreign policy are what get most visibility. The profound domestic reforms, such as over the judiciary and prosecutor, are initiated, but require longer to become effective and durable. The coalition is sustained by parties containing the inherent geopolitical and policy-related contradictions. There is a common understanding that only significant and continuous successes can hold it together. A new governing deal has been sealed on September 16th between the Socialists and ACUM, introducing non-aggression principles for the governing coalition.

Demolishing each and every influence of the oligarch Vladimir Plahotniuc over the state apparatus constitutes the unifying principle of the coalition. Nevertheless, the de-oligarchization seems rather mono-dimensional. An overarching goal of building mechanisms of protection against any future renewal of oligarchic interference in decision and law-making per se is missing from the picture.

A basic anti-Plahotniuc measure undertaken by the ruling Socialist-ACUM coalition sees a proposal for a statement by the Parliament that demands the 186 signatory parties of the UN Convention against Corruption, including the EU, to target Vladimir Plahotniuc. In particular, the parliamentary majority seeks to impose individual sanctions against him, and assistance to track and recover all his possible assets (The Parliament of the Republic of Moldova, 26 July 2019). The same initiative would request more than 26 countries listed in the reports on Moldovan banking fraud (Kroll-1, Kroll-2) to subject Plahotniuc, and his partner and main suspect the businessman Ilan Shor, to investigative actions. In parallel, the monopolies previously linked to the oligarchic regime are also under attack. The members of the coalition are pushing the competition agency to investigate the unlawful monopoly in media advertising and cereals exports (e.g. wheat). The activity of state enterprises formerly used for illegal schemes fall under other calls of investigation, launched by Prime Minister Maia Sandu (RadioChisinau, 20 June 2019). The privatization deals, agreed before Plahotniuc’s regime, face a serious revision as well. As part of this endeavor, it is proposed that the International Chisinau Airport, dubiously privatized in 2013, be brought back into state ownership.

Incontestably, the government whose economic policy ministers are entirely from the ACUM bloc, tries to repair the economy and the overstretched public expenditures. Similarly, auditing and procurement requirements are intensified (TV8, 28 July 2019) in order to reanimate badly managed public enterprises in telecommunications, scrap metal, and energy sectors.

Meanwhile President Dodon tactically distances himself from the government in case of mistakes. He also confidently keeps playing the Russian card. Most importantly, he dominates the negotiations with Russia on the future gas contract, and claims that a reduction of gas prices by Gazprom, by up to 30%, is possible because of “Moldova’s observer status in the Eurasian Economic Union” (Infotag News Agency, 18 July 2019).

The political cleansing of institutions previously accused of being “captured” is still driving the coalition. In the many cases people unsuspected of collaboration with the former oligarchic regime, and close to the new ruling parties, have obtained key positions in various ministries and state agencies. However, the promised de-politicization of institutions has sees first disillusions. Contrary to public commitments, the new chief of the National Anti-Corruption Centre is Ruslan Flocea, 41, who served since 2016 in President Dodon’s office. One of ACUM’s hardliners, Octavian Țîcu, harshly opposed this selection. Although  the co-leader of ACUM Andrei Năstase suggested to ”accept the outcome” (DW, 1 August 2019), Maia Sandu expressed dissapointments post-factum about the quality of the contest (Agora, 2 August 2019). In the end 72 votes of the Socialists, ACUM and even the former ruling  Democratic Party backed the Socialists-linked candidate (Radio Europe Free Moldova, 31 July 2019). This situation exposed the attempts of the coalition to either contribute or allow a fresh politicization of the law enforcement bodies.

The appointment of the new interim Prosecutor General was less politicized, though controversial as well. The 78 out of 101 votes backed the candidacy of Dumitru Robu, selected by the Socialists-dominated Judiciary Parliamentary Committee from a list of 9 candidates, based only on the examination of CVs (IPN, 30 July 2019). The ACUM representatives acknowledged that the selection was rushed and conducted “without competition” (JurnalTV, 30 July 2019). Dumitru Robu will carry out his mandate until the new full-fledged Prosecutor General is selected. Though Dumitru Roby climbed the prosecutor career ladder during Plathotniuc’s regime. He is strangely not suspected to be part of the former ‘captured’ system. President Dodon, and also the leaders of ACUM, have already pointed to what dossiers the new prosecutor should direct his attention (Presidency of the Republic of Moldova, 31 July 2019) – the banking fraud, alleged usurpation of power, and generally the corrupt schemes from the time of Plahotniuc’s regime. In such conditions the political independence of the prosecution, and anti-corruption policy, is to be doubted.

A similar incident of re-politicizing the institutions occurred at the Constitutional Court, where 4 out of 6 judges represent the ruling political forces – ACUM bloc and the Socialists.  None of these cases has raised questions from the major external partners. In the latest report of implementation of the Association Agreement in Moldova (EU, 11 September 2019), the EU omitted any accounts about the registered episodes of re-politicization of state institutions.

The new Moldovan government demonstrates efficiency in correcting some of the drawbacks of the previous regimes, as for example with the return to the proportional voting system in legislation adopted in August 2019. Detaining Irina Tauber and Reghina Apostolova, politically allied with the main suspects in banking fraud - Ilan Shor, ahead the EU-Moldova Council Association in the end of September, show some progress too. However, the coalition struggles to develop a comprehensive reform strategy from scratch. Naturally time is needed to initiate a good reform mechanism and to eliminate undesirable old practices, among which the politicization of state institutions. The major risk for the measures now being taken is that they aim primarily to punish Plahotniuc and his entourage, rather than to serve as strategic policy tools to promote public interests as a whole.