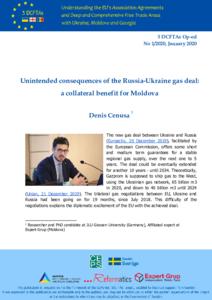 Unintended consequences of the Russia-Ukraine gas deal: a collateral benefit for Moldova

The new gas deal between Ukraine and Russia (Euroactiv, 20 December 2019), facilitated by the European Commission, offers some short and medium term guarantees for a stable regional gas supply, over the next one to 5 years. The deal could be eventually extended for another 10 years - until 2034. Theoretically, Gazprom is supposed to ship gas to the West, using the Ukrainian gas network, 65 billion m3 in 2020, and down to 40 billion m3 until 2024 (Unian, 21 December 2019). The trilateral gas negotiations between EU, Ukraine and Russia had been going on for 19 months, since July 2018. This difficulty of the negotiations explains the diplomatic excitement of the EU with the achieved deal.

Meanwhile the least energy robust country in the region – Moldova – developed some alternative solutions to mitigate the worst scenario of gas supply interruption, as uncertainty was high until the last day of the negotiations. However, none of these measures can decrease the dependence on Russia (3DCFTAs, 2 May 2019), given that  the gas contract with it was prolonged for one year at the end of 2019. Even when the Romania-Moldova gas interconnection will be operational, scheduled for late 2020, the Russian gas can flow in through the Black Sea corridor, such as the TurkStream.