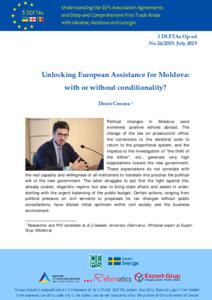 Unlocking European Assistance for Moldova: with or without conditionality?

Political changes in Moldova send extremely positive echoes abroad. The change of the law on prosecutors' office, the corrections to the electoral code to return to the proportional system, and the impetus to the investigation of "the theft of the billion", etc., generate very high expectations toward the new government. These expectations do not correlate with the real capacity and willingness of all institutions to translate into practice the political will of the new government. The latter struggles to put first the fight against the, already ousted, oligarchic regime, but also to bring state affairs and assets in order, starting with the urgent balancing of the public budget. Certain actions, ranging from political pressure on civil servants to proposals for tax changes without public consultations, have diluted initial optimism within civil society and the business environment. The government's criticism is, however, inferior to the degree of political support granted for reforming the state at the root. In parallel, President Igor Dodon regularly signals critical areas in government work, such as tax revision where the public consultations are absent, and attempts to capitalize on tactical distancing from the governing partners in the ACUM bloc (Socialistii.md, 26 July 2019).