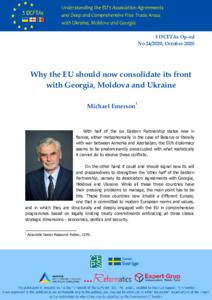 Why the EU should now consolidate its front with Georgia, Moldova and Ukraine

With half of the six Eastern Partnership states now in flames, either metaphorically in the case of Belarus or literally with war between Armenia and Azerbaijan, the EU’s diplomacy seems to be predominantly preoccupied with what realistically it cannot do to resolve these conflicts.

On the other hand it could and should signal now its will and preparedness to strengthen the ‘other half’ of the Eastern Partnership, namely its Association Agreements with Georgia, Moldova and Ukraine. While all these three countries have their pressing problems to manage, the main point has to be this. These three countries now inhabit a different Europe, one that is committed to modern European norms and values, and  in which they are structurally and deeply engaged with the EU in comprehensive programmes based on legally binding treaty commitments embracing all three classic strategic dimensions - economics, politics and security .

First, their deep and comprehensive free trade agreements (DCFTAs) with the EU work towards economic modernization to help them integrate with the modern world economy as well as that of the EU. Sector by sector they are rapidly (a decade is fast work for thorough economic transformation) adopting modern and competitive economic regulatory policies, based on those tested in the EU, with no need to try and reinvent the wheel.

Secondly, they are all engaged in the struggle to secure sound democratic governance. One may use the military language here of a ‘battle’ to improve democratic processes, to reduce and eventually eliminate corruption, and assure a correct rule of law. But let us indeed use this military language to make the fundamental point that these countries are ‘fighting’ not bloody, destructive wars nor to overthrow a wretched dictatorship, but to converge on sound democratic governance.  In fact all three states face elections in the month ahead - local in Ukraine, presidential in Moldova and parliamentary in Georgia, with risks that progressive parties will lose ground.

Third, in today’s troubled European neighbourhood it is more significant than ever that the three associated states are perfectly at peace with each other and the EU, albeit in unresolved conflicts with Russia. They are seeking to enter the priceless inner European paradigm of Kant’s eternal peace (or, in todays’ jargon, zero mutual threat perceptions), and should be supported for this.

For Ukraine, whose population exceeds all other five put together, there is a ‘live’, not virtual summit meeting in Brussels with the EU on Tuesday 6 October, with presidential participation by Volodymyr Zelensky, Charles Michel and Ursula von der Leyen.

Now therefore would be the good timing for the EU to announce its willingness to engage in an upgrading of the Association Agreements after half a decade of experience. By ‘upgrading’ one should understand something much more significant politically and in its economic substance than the mere technical ‘updating’ currently underway with respect to the evolution of EU laws (many of the EU laws referred to in the Association Agreements have been recast). Upgrading is possible, but if this is neglected by the EU, backsliding with fading commitment to implement the agreements is the serious risk.

The outlines of an upgrade are already visible in the exchanges of ideas between the EU and the three associated states over the last year, after the EU opened up a ‘structured consultation’ on the future of the Eastern Partnership. Many of the ideas are creeping incrementally into action, for example enhanced cooperation in key sectors including the digital-cyber domain and the energy-environment-climate nexus, and progressive inclusion through associate or full membership of many EU agencies and programmes. To these are now added the new public health priority to combat the Covid-19 pandemic, where the EU has promptly supplied emergency assistance, but this need to be followed by long-term capabilities (research findings, supplies of vaccines, etc.). There is also the ‘more for more’ principle advocated by the EU under which there would be more funding alongside effective commitment to identified areas of policy reform, for which anti-corruption and integrity of the rule of law are prime examples. However it remains to be clarified on the EU side whether this is just talk, or a hard proposal.

These are all fragments, albeit some of high importance. What is missing is an enhanced political framework to give synergy and meaning to the sum of the parts. Georgia, Moldova and Ukraine have in fact united to propose to the EU a shared framework for policy dialogue and development, undertaken at the ‘EU+3’ level. There are already so many policy issues embedded in the Association Agreements warranting common dialogue over common concerns and interests (e.g. how to join in the Green Deal, how to plan further trade liberalization especially for services, how to organise common cyber defence capabilities, etc.).

The EU (Council and Commission) have so far ignored such EU+3 proposals, with some support only in the European Parliament. Why such reluctance? There may be two reasons. First, it has been argued that there has to be due regard for the principle of ‘inclusiveness’ of the Eastern Partnership for all six states, so as not to discourage the other three from moving closer to Europe and its values. The conflicts within Belarus and between Armenia and Azerbaijan void this argument of credibility. On the contrary it would be good for these countries and peoples to see more vividly what they are missing by way of a better place in Europe, as seen in a successful evolution of the Association Agreements. Second, there is the current framing of the old ‘Russia first’ argument, according to which a deepening of links with East European states would prejudice priority cooperation with Russia. President Macron has been trying to test the market for a certain rapprochement with Russia, and his well-meaning attempt was met in the most recent telephone call between the two leaders on 23 September by Putin’s ridiculous suggestion that Navalny may have poisoned himself. Thus a reality check for this second argument.

The conclusion therefore is that the EU has both the capacity and interest to take the initiative to propose dialogue with Georgia, Moldova and Ukraine together over the content of a significant upgrade of the Association Agreements, subject to all the necessary conditions that should usefully apply. A start could be made at the 6 October summit meeting with Ukraine. The initiative would be fed into preparation for the next Eastern Partnership summit scheduled for March 2021, although as of today it is hard to see how the sanctioned regime of Lukashenko could be invited, or how the warring leaders of Armenia and Azerbaijan could sit at the same table together. As of today there might be only three participants in the EaP summit. At the very least one can say that the doctrine of ‘inclusiveness’ of the Eastern Partnership is suspended. It could be given renewed meaning in the event, for example, that Lukashenko conceded to hold a truly democratic presidential election.

The practical urgency of an initiative to strengthen the European orientations of the three associated states is amply reinforced by the political contexts in the cascade of forthcoming elections in Ukraine (25 October), Georgia (31 October) and Moldova (1 November). In Ukraine the Zelensky administration has been fast falling in public approval, and the question is what alternative political forces will gain ground instead, which includes various Russia-friendly and nationalist parties. In Moldova the openly pro-Russian President Dodon looks to be in a straight fight with the pro-European Maia Sandu. In Georgia the question is whether the election can be conducted fairly, or biased of favour of the oligarch leader’s party. So the politics of this other Eastern Europe are highly fluid, and pro-European orientations need every help they can get. The EU should take the initiative now to consolidate its front with these three democratic and peaceful states.