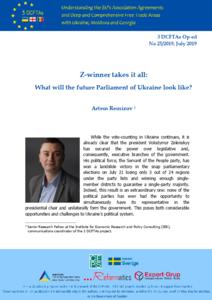 Z-winner takes it all: What will the future Parliament of Ukraine look like?

While the vote-counting in Ukraine continues, it is already clear that the president Volodymyr Zelenskyy has secured the power over legislative and, consequently, executive branches of the government. His political force, the Servant of the People party, has won a landslide victory in the snap parliamentary elections on July 21 losing only 3 out of 24 regions under the party lists and winning enough single-member districts to guarantee a single-party majority. Indeed, this result is an extraordinary one: none of the political parties has ever had the opportunity to simultaneously have its representative in the presidential chair and unilaterally form the government. This poses both considerable opportunities and challenges to Ukraine’s political system.

But what will the newly elected parliament look like in terms of the profile of MPs? The new Rada will see one of the highest levels of renewal – around 80% of the people’s deputies are going to be newcomers. Also, the new Supreme Council will be much younger (by 7.4 years) [1] since the average age of representatives of ‘freshmen’ parties, the Servant of the People and Voice, is around 37-40 years old. What is more, women representation in the Rada will set a new record for Ukraine’s legislature by growing from 12% up to almost 21%. It should be noted that the European Solidarity faction of the ex-president Petro Poroshenko will consist of around 40% women while for the Voice faction of the rock-star Svyatoslav Vakarchuk it is almost 50%. The next Rada will also have its first African Ukrainian MP – a Greco-Roman wrestler and an Olympian silver medalist Zhan Beleniuk.

But the most distinctive feature of these elections is that the enormous public support of Zelenskyy’s political brand has allowed many ‘no names’, with no previous experience in politics, to enter the parliament. In particular, those newcomers have beaten many powerful local ‘feudals’ and experienced MPs in single-member districts. However, the people’s choice in many instances was indiscriminate: in their desire to get rid of representatives of old elites, the voters chose individuals who lacks any expertise and whose political views are rather vague. For instance, one of the cases that went viral in the social media was the victory of 29-year-old wedding photographer who won against the owner of one of the biggest factory in the city of Zaporizhia (it is not to say that electing the latter would be a better option). Moreover, among the future MPs, there are 30 of those who declared as unemployed (5 fewer than in the previous Rada), or for whom information is difficult to find even on the Internet.

It should be mentioned though that the list of future MPs includes representatives of scientific and academic community, small and medium business, legal experts, journalists, as well as many former assistants to MPs. Moreover, many civil society activists and reformers who have a clean reputation and proven to be professionals in their respective fields are also entering the Rada, in particular, via the lists of the Servant of the People and Voice. At the same time, they are not in the majority. Thus, amid the concentration of power in Zelenskyy’s hands, the question remains if those could take a principled stance against the vested interests in the parliament would in practice counteract the potential abuse of power by the presidential team, both within and outside of the legislature.

Indeed, if there is a strong political will, the public legitimacy and administrative instruments it provided for the "Z-team" could be used to re-launch and accelerate the implementation of the necessary reforms in various spheres. However, given the lack of relevant checks and balances, there is a risk that the absolute power of the president, reinforced with his populist slogans, could lead to a shrinking of political freedoms and clearing the political field from any competition. The latter could also emerge within the "Z-team" itself. In this respect, the president’s political force has put the proposal to enable citizens to recall MPs from the Rada. This could provide the party with political leverage not only over opposition but also over its potential internal ‘dissidents’.

In a nutshell, the recent history has shown that renewal of the parliament with ‘new faces’ is not a guarantee for its effective work, while many of those who enter the parliament for the first time will be no less exposed to the corruption risk and manipulations by the experienced shadow deals makers. Furthermore, since the biggest party has been established just recently and given the number of MPs it managed to put into the parliament seats, it remains to be seen how the effective coordination of the faction will be ensured. Finally, the productive work at the committees and the quality of legal drafting is another serious issue, given the inadequate level of expertise of many newly elected MPs.

[1] According to the data by civil network OPORA.