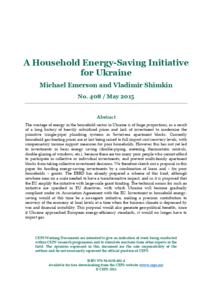 A Household Energy-Saving Initiative for Ukraine

The wastage of energy in the household sector in Ukraine is of huge proportions, as a result of a long history of heavily subsidised prices and lack of investment to modernise the primitive (single-pipe) plumbing systems in Soviet-era apartment blocks. Currently household gas-heating prices are at last being raised to full import cost recovery levels, with compensatory income support measures for poor households. However this has not yet led to investments in basic energy saving (double-piping, metering, thermostatic controls, double-glazing of windows, etc.), because there are too many poor people who cannot afford to participate in collective or individual investments, and prevent multi-family apartment blocks from taking collective investment decisions. We therefore sketch out a proposal in this paper for funding energy-saving investments by a combination of loans and – for poor households – grants. The EBRD has already prepared a scheme of this kind, although nowhere near on a scale needed to have a transformative impact, and so it is proposed that the EU amplify the initiative with large-scale grant funding. The technical norms for such an initiative are specified in EU directives, with which Ukraine will become gradually compliant under its Association Agreement with the EU. Investment in household energysaving would at this time be a no-regrets initiative, making a precious contribution to recovery of the economy at local levels at a time when the business climate is depressed by war and financial instability. This proposal would also generate geo-political benefits, since if Ukraine approached European energy-efficiency standards, it would no longer have to import gas.