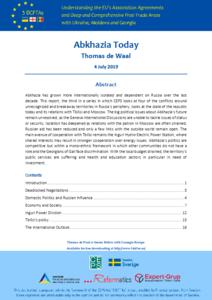 Abkhazia has grown more internationally isolated and dependent on Russia over the last decade. This report, the third in a series in which CEPS looks at four of the conflicts around unrecognized and breakaway territories in Russia’s periphery, looks at the state of the republic today and its relations with Tbilisi and Moscow. The big political issues about Abkhazia’s future remain unresolved, as the Geneva International Discussions are unable to tackle issues of status or security. Isolation has deepened as relations with the patron in Moscow are often strained, Russian aid has been reduced and only a few links with the outside world remain open. The main avenue of cooperation with Tbilisi remains the Inguri Hydro-Electric Power Station, where shared interests may result in stronger cooperation over energy issues. Abkhazia’s politics are competitive but within a mono-ethnic framework in which other communities do not have a role and the Georgians of Gali face discrimination. With the local budget strained, the territory’s public services are suffering and health and education sectors in particular in need of investment.