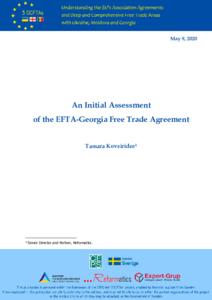 An Initial Assessment of the EFTA-Georgia Free Trade Agreement


The Free Trade Agreement between Georgia and the European Free Trade Area (EFTA) counts roughly two years of implementation – not a long period of time to substantially change either trade structures or their dynamics, but long enough to analyse first results and possible signs of trade-related impacts.

This article explains the basic content of the EFTA-Georgia FTA and analyses trade relations between Georgia and the four EFTA states, in particular since the conclusion of the free trade agreement in 2016.

Being deeply integrated with the EU through the European Economic Area, or bilateral agreements in the case of Switzerland, EFTA as a rule signs free trade agreements with countries that have a similar agreement with the EU. Thus, an FTA with EFTA was to be expected in due course after the signature of the DCFTA between Georgia and the EU in 2014. The agreement is for EFTA driven more by political rather than economic considerations. Notably, when the negotiations started in 2015, trade volume between Georgia and the four EFTA countries was only $110 million.

Actually, Georgia had been requesting a free trade regime with EFTA even before the start of negotiations on the DCFTA, with the EU hoping to get a derogation from the basic rule and practice - just like it did with Turkey – and sign an FTA prior to concluding the DCFTA. This was not because any of the EFTA states were key trade partners of Georgia, but because the objective was to increase the country’s investment attractiveness and competitiveness through additional free trade regimes, thus broadening the potential market for the export of Georgian products.

Negotiations started after the signature of the DCFTA and the agreement entered into force on the 1st of September 2017 with Iceland and Norway and on the 1st of May with Switzerland and Liechtenstein. Thus, the agreement is in force for roughly two years.

Difference between the EU-Georgia DCFTA and EFTA-Georgia FTA

Despite the above-mentioned parallel track approach in trade policies pursued by the EU and EFTA, the two free trade regimes between Georgia and the EU and EFTA respectively are fundamentally different: the ultimately objective of the EU-Georgia DCFTA is to ensure gradual integration of Georgia in the EU market through eliminating not only tariff barriers, but dealing extensively with non-tariff barriers through a comprehensive – very costly, but eventually potentially beneficial - legislative approximation. The latter means more specifically that Georgia’s trade-related regulations broadly speaking have to be approximated with much of the EU acquis. In the case of EFTA, on the contrary, it is a simple FTA, where the so called ‘deep and comprehensive’ part is missing. Instead of referring to specific EU directives and regulations, the Georgia-EFTA FTA refers to major WTO agreements in all relevant areas such as intellectual property rights, public procurement, and industrial and agricultural product safety standards. The table below summarises the main differences between Georgia’s FTAs with the EU and the EFTA:

The EFTA-Georgia free trade agreement is a best practice standard trade agreement (sometimes referred to as a simple FTA in contrast with the deep and comprehensive DCFTA) and includes the following topics:

The EFTA-Georgia FTA has 13 chapters and covers areas such as trade in goods, rules of origin, sanitary and phytosanitary measures, technical barriers to trade, trade in services, investment and establishment, intellectual property rights, government procurement, competition, and trade and sustainable development. As mentioned above, both parties commit to comply with basic WTO rules and there is no requirement for Georgia – unlike the DCFTA – to approximate its legislations with the regulations of any of the EFTA states.

The agreement also employs the Pan-Euro-Mediterranean rules of origin, which allows for the so-called diagonal cumulation between EFTA states, Georgia and any other PEM Convention member state, provided that respective agreements are in place.

The EFTA states – even though they have a single FTA with Georgia – have negotiated individual, slightly differing, market access conditions with Georgia. More specifically, the tariff regimes for their import of Georgian agricultural products are not identical. For example, Iceland exempted from tariff-free treatment dairy products, some products containing chocolate and cocoa, malt extract and food preparations of flour. As for Norway, frozen bovine meat, meat of sheep or goat, dairy products, some vegetables on seasonal basis are exempted. In case of Switzerland the exemptions cover some preparations of fruits and vegetables, while various meat and dairy products are subject to tariff quota limits. Georgia, on the other hand, fully liberalised market access for agricultural products from EFTA states. Market access for industrial goods, including fish and other marine products, is fully liberalized on both sides.

Given that a relatively short period has passed – two years - since the entry into force of the agreement, we can only talk about first signs in the change of trade volume and trade structure, if any.

Georgia’s trade with EFTA is comparatively marginal. Trade turnover between Georgia and EFTA equaled $154,7 million in 2019 comprised only 1.2% of Georgia’s total foreign trade. Overall, it has a growing trend, but the growth varies from year to year, and the trend is unstable.

EFTA is one of the rare cases in Georgia’s foreign trade structure, where the trade balance is positive. This is largely due to the positive trade balance with Switzerland, which is Georgia’s most important trade partner in EFTA. Exports to EFTA exceeded imports for the first time in 2016 and this trend was maintained until 2019.

The second largest trade partner within EFTA is Norway (with a marginal share of 0,1% in Georgia’s total trade), where Georgia’s main export products include beverages and spirits and preparations of fruits and vegetables. However, export volumes are still extremely low ($91,000 in 2018, and $74,000 in 2019).

Exports to Iceland and Liechtenstein are even smaller in value. Trade with Iceland has been in low single digits in the past years, whereby with Lichtenstein commercial relations are almost non-existent, trade volume not exceeding 1 ml USD since 2010.

Trade volumes between Georgia and EFTA countries have been increasing over the last 15 years, with average annual growth rate of 14.3%. Interestingly, the average annual export growth in the two years prior to the FTA was 70% higher than for the two years after the entry into force of the FTA. As for total trade, it grew by 14% in 2016-2017 and by a more moderate 5% in 2018-2019.

Thus, the short history of the FTA implementation has not yet led to any new dynamics and noticeable increase of trade so far.

The table below summarises the major trends and figures in Georgia’s trade with the four EFTA states in the two years before and after the FTA. The most marked development was the jump in exports in 2016, which is due to increase of Georgia’s export to Switzerland. This in turn was caused by the start of gold export to Switzerland in 2016, approximately two years before the entry into force of the FTA between Georgia and Switzerland. Georgia exports gold to a handful of countries, among which Switzerland is the main export partner since 2016. In the past five years (2015-2019) Georgia exported worldwide on average gold worth of $ 70 million per year. In 2019 $65 million worth of gold was exported to Switzerland, which is almost 80% of Georgia’s total export to this country in the same year, and up to 90% of Georgia’s gold export worldwide.

To summarise, Georgia’s FTA with EFTA is substantially different from the DCFTA in terms of non-tariff obligations as well as market access of Georgian products to EFTA countries. Georgia-EFTA FTA has not yet translated into increased exports by Georgia. Offering full bilateral liberalisation on all industrial products, as well as fish and marine products, and most agricultural produce, this FTA also envisages the possibility of diagonal cumulation of origin with PEM Convention members. However, it does not include any legislative approximation obligations for Georgia. Although the long-term growth trend of trade between Georgia and EFTA is positive, the FTA has not yet resulted in any substantial increase in trade volume or notable change in structure. Thus, its potential remains to be realized.