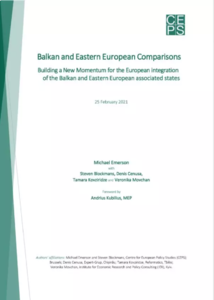 CEPS first published in 2018 a comparison of how the Balkan and Eastern European associated states fared in their progressive alignment on EU laws and norms. This attracted considerable attention, notably because the detailed research showed that the two groups of states were becoming increasingly comparable in their alignment on the EU acquis.

A more recent suggestion that this work should be updated and deepened for its policy implications has led to this study completed by the "3DCFTAs" Project team (CEPS, Expert-Grup, IER,  and Reformatics).

Andrius Kubilius MEP, former Prime Minister of Lithuania, in particular encouraged CEPS to do this, and the authors thank him for his stimulus and support.


You can also access the presentation of the study given by Michael Emerson to the UNDP Regional Bureau for Europe and Central Asia.