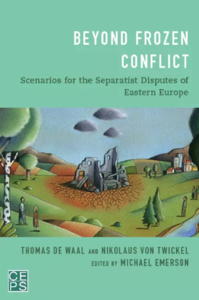 Beyond Frozen Conflict: Scenarios for the Separatist Disputes of Eastern Europe

The renewed war between Azerbaijan and Armenia over Nagorno Karabakh makes this publication on all of the unresolved conflicts of the post-Soviet space uniquely valuable background reading. The chapter on Nagorno Karabakh by Thomas de Waal concludes with several scenarios, including that of renewed war which is tragically exactly what is now happening

This book is the first to give an up-to-date account of all five conflicts (Abkhazia, South Ossetia in Georgia, Transnistria in Moldova, and Nagorny Karabakh contested between Armenia and Azerbaijan, Donbas in Ukraine) in an analytically consistent manner. It charts new territory in exploring systematically a full range of scenarios for the possible future of all five conflicts and offers a basis of sound information for officials, diplomats, scholars and the general public.

“A compelling and comprehensive account of the fluid conflicts and frozen peace processes in Eastern Europe. A must read for all those who wish to understand the region.”
Natalie Tocci, Director, Istituto Affari Internazionali, Rome

“The indispensable source for information and analysis on the conflicts and separatist entities on the post-Soviet periphery. Whether you are a seasoned expert or unfamiliar with the region, for both historical understanding and policy insight, this is a must read.”
William Hill, Global Fellow, Kennan Institute, Woodrow Wilson International Center for Scholars

“This thorough and excellent study traces the development of the conflicts in order to make predictions for their further course together with policy recommendations for the European Union.”
Peter Semneby, Former EU Special Representative for South Caucasus

“This book invites the reader to embrace the complexity of the conflicts in the post-Soviet space and disentangle geopolitical manoeuvers from collective grievances.”
Natalia Mirimanova, Founder and Director of the Eurasia Peace Initiative

“An honest, brave, comprehensive and timely analysis of the possible ways of mitigation of the geopolitical risks connected with five post-Soviet ‘frozen’ conflicts. As a Ukranian I completely support their conclusions.”
E. Oleksandr Chalyi, former First Deputy Minister for Foreign Affairs of Ukraine

Thomas de Waal is a writer, analyst and Senior Fellow at Carnegie Europe, specialising in Eastern Europe and the South Caucasus.

Nikolaus von Twickel is an analyst for conflicts related to Russia and is an editor at the Center for Liberal Modernity in Berlin.

This book has been part of a project on the EU’s Association Agreements with Georgia, Moldova and Ukraine supported by Sweden through the Swedish International Development Agency (Sida).