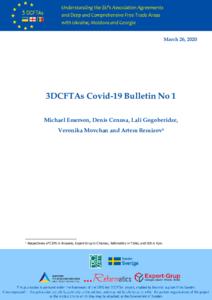 While the EU has become the epicentre of the global Covid-19 crisis, the three AA states – Georgia, Moldova and Ukraine – have so far remained remarkably lightly affected. This is in spite of the fact that all three countries have large diasporas in the EU, with large numbers of cross-border family links and movements.

It is evident, as documented below, that all three states have taken substantial and early measures to curb infections.

However, interpretation of the data is going to require more time to pass. Caution is certainly due with regard to the low infection rates, which are influenced by low testing. The very low death rates are presumably more robust data statistically, although here there may be some misclassifications (e.g. of pneumonias).

A second reason for caution is that these countries may still tend to catch up with a time lag with typical European experience. The Georgian Government has already warned of expected further spread of the virus.

Notwithstanding these cautions, the three countries may yet prove to have been relatively successful in minimising the direct medical incidence Covid-19. At the same time, they are clearly suffering the same huge extent of economic losses due to their restrictive measures similar to what is observed in the EU.

This paper will be updated as and when major new developments emerge, and published in subsequent editions of this Bulletin.