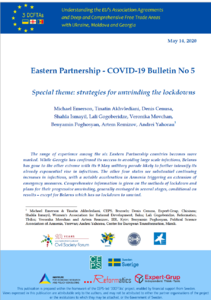 COVID-19 Bulletin No 5: Strategies for Unwinding the Lockdowns

The range of experience among the six Eastern Partnership countries becomes more marked. While Georgia has confirmed its success in avoiding large scale infections, Belarus has gone to the other extreme with its 9 May military parade likely to further intensify its already exponential rise in infections. The other four states see substantial continuing increases in infections, with a notable acceleration in Armenia triggering an extension of emergency measures. Comprehensive information is given on the methods of lockdown and plans for their progressive unwinding, generally envisaged in several stages, conditional on results – except for Belarus which has no lockdown to unwind.