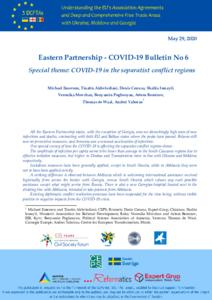 COVID-19 Bulletin No 6: COVID-19 in the Separatist Conflict Regions

All the Eastern Partnership states, with the exception of Georgia, now see disturbingly high rates of new infections and deaths, contrasting with both EU and Balkan states where the peaks have passed. Belarus still sees no preventive measures, and Armenia sees a renewed acceleration of infections.

Our special survey of how the COVID-19 is affecting the separatist conflict regions shows:

The amplitude of infection per capita seems to be lower than average in the South Caucasus regions due to effective isolation measures, but higher in Donbas and Transdnistria more in line with Ukraine and Moldova respectively.

Lockdown measures have been generally applied, except in South Ossetia, while in Abkhazia they seem not to have been applied strictly.

A striking difference is observed between Abkhazia which is welcoming international assistance received logistically from across the border with Georgia, versus South Ossetia which refuses any such possible assistance except what might arrive from Russia. There is also a new Georgian hospital located next to the dividing line with Abkhazia, intended to take patients from Abkhazia.

Existing diplomatic conflict resolution processes have been suspended for the time being, without visible positive or negative impacts from the COVID-19 crisis.