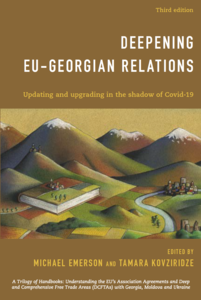 Deepening EU-Georgian Relations: Updating and upgrading in the shadow of Covid-19. Third edition.

This Handbook, now in its third edition, represents the most comprehensive and independent assessment of the Association Agreement and Deep and Comprehensive Free Trade Area (DCFTA) between the EU and Georgia. It is one of a Trilogy of Handbooks, alongside comparable publications on Moldova and Ukraine.

The purpose of Deepening EU-Georgian Relations is to make the complex political, economic, and legal content of the Association Agreement readily understandable. This third edition, published seven years since the Agreement’s implementation is substantially new in content, both updating how Georgia has been enacting the Agreement, and introducing new dimensions (including the Green Deal, the COVID-19 pandemic, cyber security, and gender equality). The Handbook is also up to date in analysing Georgia’s troubled democracy.

For Georgia, the signing of the Association Agreement and the DCFTA with the European Union in 2014 was an act of strategic geopolitical significance. Of all the EU’s eastern partners, the country distinguished itself since the Rose Revolution of 2003 by pushing ahead with a radical liberalisation and economic reform agenda. Georgia is unique among the countries in the region for having largely cleansed its economy of corruption in the post-Rose Revolution period, although its political system is marked by oligarchal state capture since the change of government in 2012, and in the most recent period by grave instability that has drawn the EU into an increasingly active role.

“These books offer a one-stop guide to the Association Agreements—the authors have painstakingly analysed the incredibly complex Agreements to deliver a compact and accessible overview to all those who need to grasp their contents. The national teams also shed light on the salience of the content for domestic reforms. Even though the books are not meant to be read like a book, the reader who does so is rewarded with a panoramic overview of the sheer scale and ambition of the AA-DCFTA. The books offer a plethora of pivotal insights into the Agreements while at the same time raising a number of important questions. A ‘Bible.’” — Kataryna Wolczuk, Centre for Russian, European and Eurasian Studies, University of Birmingham.

Co-published with Rowman and Littlefield International (RLI), this book can be purchased from the RLI website.