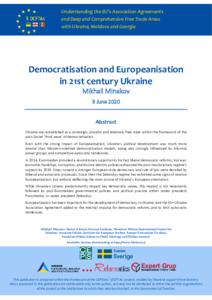 Ukraine was established as a sovereign, pluralist and relatively free state within the framework of the post-Soviet ‘third wave’ of democratisation.

Even with the strong impact of Europeanisation, Ukraine’s political development was much more diverse than Western-oriented democratisation models, being also strongly influenced by informal power groups and competitive autocratic tendencies.

In 2014, Euromaidan provided a revolutionary opportunity for fast liberal democratic reforms, but war, economic hardships, corruption, and divisive identity policies exhausted the post-revolutionary regime’s support by 2019. Steps toward a stronger European-style democracy and rule of law were derailed by illiberal and autocratic processes. Since then the Zelenskyy regime has exhibited some signs of reverse Europeanisation, but without deflecting the main course of Ukraine’s European orientation.

While Ukrainian citizens predominantly respect key democratic values, this respect is not necessarily followed by post-Euromaidan governmental policies and political practice either under president Poroshenko, or under president Zelenskyy.

Europeanisation has been important for the development of democracy in Ukraine, and the EU–Ukraine Association Agreement added to the internal impulse for democratic reforms and to limit autocratic tendencies.