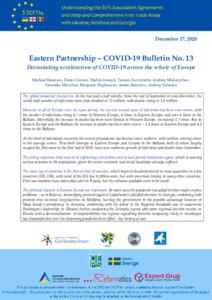 EaP COVID-19 Bulletin No 13: Devastating acceleration of COVID-19 across the whole of Europe

The global pandemic charges on. In the two and a half months, from the end of September to mid-December, the world total number of infections more than doubled to 72 million, with deaths rising to 1.6 million.

At the level of individual countries the extent of pandemic has become more uniform, with outliers coming closer to the average scores. Thus both Georgia in Eastern Europe and Croatia in the Balkans, both of whom largely escaped the first wave in the first half of 2020, have seen explosive growth of infections and deaths since September.

The policy responses tend now to be tightening restrictions and at least partial lockdowns again, which is causing serious tensions in the population, given the severe economic and social hardships already suffered.

The main ray of sunshine is the first arrival of vaccines, which begin to be administered in mass quantities in a few countries (US, UK), with most of the EU due to follow soon, but with uncertain timing in many other countries. First vaccinations have taken place also in Russia, but the volumes available seem to be small.

The political impacts in Eastern Europe are important. In most cases the pandemic has added to other major regime problems – as in Belarus, intensifying protests against Lukashenko’s falsified election; in Georgia, combining with protests over electoral irregularities; in Moldova, hurting the government to the possible advantage however of Maia Sandu’s presidency; in Armenia, combining with the defeat in the Nagorno Karabakh war to undermine Pashinyan’s leadership; in Ukraine further weakening the Zelensky regime after poor regional election results; in Russia with a decentralisation  of responsibilities the regions signalling Kremlin incapacity. Only in Azerbaijan has dissatisfaction over the deepening pandemic been offset – by victory at war.