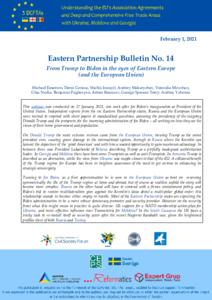 EaP Bulletin No 14: From Trump to Biden in the eyes of Eastern Europe (and the European Union)

This webinar was conducted on 27 January 2021, one week after Joe Biden’s inauguration as President of the United States. Independent experts from the six Eastern Partnership states, Russia and the European Union were invited to respond with short papers to standardised questions, assessing the presidency of the outgoing Donald Trump and the prospects for the incoming administration of Joe Biden – all writing on how they see the views of their home government and population.

On Donald Trump the most extreme reviews came from the European Union, viewing Trump as the worst president ever, causing grave damage to the international system, through to Russia where the Kremlin can lament the departure of the ‘good American’ and with him a wasted opportunity to gain maximum advantage. In between there was President Lukashenko of Belarus describing Trump as a pitifully inadequate authoritarian leader. In Georgia and Moldova there have been some Trumpists as well as anti-Trumpists. In Armenia Trump is described as an aberration, while the view from Ukraine was maybe closest to that of the EU. A collateral benefit of the Trump regime for Europe has been to heighten awareness of the need to get serious in enhancing its strategic sovereignty.

Turning to Joe Biden, as a first approximation he is seen in the European Union as bent on reversing symmetrically the ills of the Trump regime at home and abroad, but of course as realities unfold the story will become more complex. Russia on the other hand will have to contend with a firmer containment policy, and Biden’s bid to restore multilateralism goes against the Kremlin’s ideas about a multi-polar global order: this relationship stands to become either empty or hostile. Most of the EasternPartnership states are expecting the Biden administration to be a more robust democracy promoter and security provider. However on the security front what this might mean in practice is quite diverse: US support for a NATO membership action plan for Ukraine, and more effective influence over Transnistria for Moldova? In the SouthCaucasus the US faces a tricky task to re-install itself as security actor after the recent Nagorno Karabakh war, given the heightened profiles there of both Russia and Turkey.