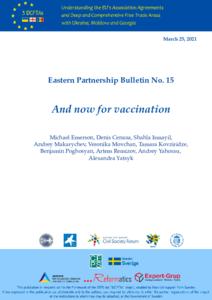 EaP Bulletin No 15: And now for vaccination

While third waves of infections have been continuing in much of Europe, maximum efforts are now being made to assure mass vaccination as the only way to stop the pandemic.

Among major countries, the US and UK have made the fastest starts with total jabs corresponding to 38% and 45% of the population respectively, while for China and Russia the numbers have so far amounted to 5-6%.

Within the EU vaccination rates are now rising steadily, reaching on average about 13 % of the population by 22 March, and these rates expected to surge ahead in the weeks and months to come, with massive procurement orders having been placed (2.6 billion jabs), i.e. well above the need of the 450 million population if all vaccines are found to be safe and effective, which seems to be the case.

By comparison Eastern Europe lags way behind, with all countries recording so far only 0.5% of population or less, with the exception of Azerbaijan (4.8%). The WHO Covax scheme expected to supply vaccines for at least 20% of countries' population is at present their main common source. In addition, Romania has donated 200,000 jabs to Moldova. Belarus obtains 200,000 doses of Sputnik V from Russia, while securing also 100,000 doses of Sinopharm from China. Ukraine has already contracted at least 3.9 million doses of vaccines in China and India.

While the EU’s major $2.6 billion contributions to the WHO Covax scheme (EU and member states) is clear, nothing is yet known about how the EU will make available its likely excess supplies in bilateral assistance. This is presumably because of the serious ongoing political tensions due to delayed deliveries of both the AstraZeneca and Pfizer/BioNtech vaccines, compounded by the temporary precautionary suspension by several European countries of the AstraZeneca vaccine. However these suspensions have now been largely lifted, given the ‘safe and effective’ assessments made by the WHO and European Medicines Agency.

Clear statements of intent by the EU to supply vaccines to neighbouring countries as soon as domestic needs are assured would be much appreciated. The neighbouring states in the Balkans and Eastern Europe understandably expect advance indications of future supplies of vaccines from the EU (especially Ukraine which renounces recourse to the Russian Sputnik V). Their combined population of 72 million is a small number in relation to likely excess supply capacity contracted by the EU.

So far the EU has been acting in total contrast to China and Russia in their multilateral versus bilateral methods of vaccine diplomacy. The EU and member states are making major contributions to the multilateral WHO Covax scheme, while largely abstaining so far from providing vaccine supplies bilaterally. China and Russia are not contributing at all to the largely ‘invisible’ multilateral Covax, while engaging exclusively in highly ‘visible’ bilateral operations. The EU will soon have surplus vaccine supplies available to add streams of bilateral assistance on a large scale, and would be well advised to announce plans for this notably for its close neighbourhood.