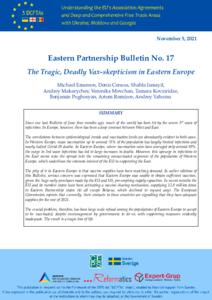 EaP Bulletin No 17: The Tragic, Deadly Vax-scepticism in Eastern Europe

Since our last Bulletin of June four months ago, much of the world has been hit by the severe 3rd wave of infections. In Europe, however, there has been a deep contrast between West and East.

The correlations between epidemiological trends and vaccination levels are abundantly evident in both cases. In Western Europe, mass vaccination up to around 75% of the population has largely limited infections and nearly halted Covid-19 deaths. In Eastern Europe, where vaccination rates have averaged only around 30%, the surge in 3rd wave infections has led to large increases in deaths. However, this upsurge in infections to the East seems now the spread into the remaining unvaccinated segments of the population of Western Europe, which underlines the common interest of the EU in supporting the East.

The pity of it in Eastern Europe is that vaccine supplies have been matching demand. In earlier editions of this Bulletin, serious concern was expressed that Eastern Europe was unable to obtain sufficient vaccines, given the huge early purchases made by the EU and US, pre-empting supply capacities. In recent months the EU and its member states have been activating a vaccine sharing mechanism, supplying 12.8 million doses to Eastern Partnership states (to all except Belarus, which declined to request any). The European Commission reports that currently, their contacts in these countries are signalling that they have adequate supplies for the rest of 2021.

The crucial problem, therefore, has been large scale refusal among the populations of Eastern Europe to accept to be vaccinated, despite encouragement by governments to do so, with supporting measures evidently inadequate. The result is a tragic loss of life.