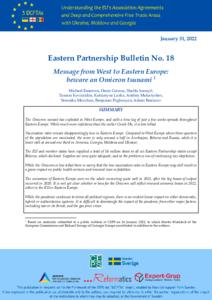 EaP Bulletin No 18. Message from West to Eastern Europe: beware an Omicron tsunami

The Omicron variant has exploded in West Europe, and with a time lag of just a few weeks spreads throughout Eastern Europe. While much more infectious than the earlier Covid-19s, it is less lethal.

Vaccination rates remain disappointingly low in Eastern Europe. Compared to West Europe where three-quarters of the population are vaccinated, the score is only around a half in Azerbaijan, Belarus and Russia, while it is lower still at around one third in Armenia, Georgia, Moldova and Ukraine.

The EU and member states have supplied a total of 14 million doses to all six Eastern Partnership states except Belarus, which declined. Supplies are now quite adequate, and so the problem is one of continuing vax-skepticism.

While the Omicron is less lethal there is worry that the low vaccination rates in Eastern Europe may still result in a grave impact on public health services and renewed rises in fatalities.

The economies of Eastern Europe were on the whole recovering quite well in 2021, after the big losses of output incurred in 2020. It is not yet clear whether or how far the Omicron will inflict renewed economic losses in 2022, either in the EU or Eastern Europe.

While the pandemic continues to stress all political regimes, there is no evident linear impact on either democratic, hybrid or authoritarian systems. It is difficult to disentangle the impact of the pandemic from other major factors, including war or its threat, and the gas price crisis.