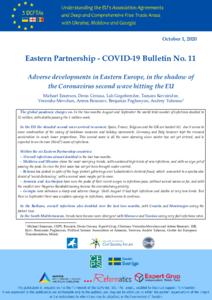 EaP COVID-19 Bulletin No 11: Adverse developments in Eastern Europe, in the shadow of the Coronavirus second wave hitting the EU

The global pandemic charges on. In the two months August and September the world total number of infections doubled to 32 million, with deaths passing the 1 million mark.

In the EU the dreaded second wave arrived in earnest. Spain, France, Belgium and the UK are hardest hit,  due it seems to some combination of the easing of lockdown measures and holiday movements. Germany and Italy however kept the renewed acceleration to much lesser proportions. This second wave is all the more alarming since winter has not yet arrived, and is expected to see its own (third?) wave of infections.

Within the six Eastern Partnership countries:

- Moldova and Ukraine show the most worrying trends, with sustained high levels of new infections, and with no sign yet of passing the peak. So even the first wave has not yet been brought under control.

- Belarus has peaked in spite of the huge protest gatherings over Lukashenko’s electoral fraud, which  amounted to a spectacular denial of ‘social distancing’, with a second wave maybe yet to come.

- Armenia and Azerbaijan have seen the peaks of their recent surges in infections pass, without second waves so far, and with the conflict over Nagorno Karabakh having become the overwhelming priority.

- Georgia now witnesses a sharp and adverse change. Until August it had kept infections and deaths at very low levels. But then in September there was a sudden upsurge in infections, which seems to continue.

In the Balkans, overall infections also doubled over the last two months, with Croatia and Montenegro seeing the fastest rises.