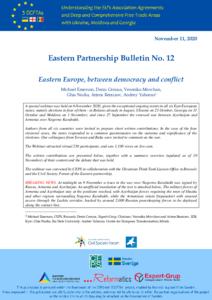 EaP Bulletin No 12: Eastern Europe, between democracy and conflict

A special webinar was held on 6 November 2020, given the exceptional ongoing events in all six East European states, namely elections in four of them - in Belarus already in August, Ukraine on 25 October, Georgia on 31 October and Moldova on 1 November; and since 27 September the renewed war between Azerbaijan and Armenia over Nagorno Karabakh.

Authors from all six countries were invited to prepare short written contributions. In the case of the four electoral cases, the notes responded to a common questionnaire on the outcome and significance of the elections. Our colleagues from Yerevan and Baku were invited to comment on the war.

The written contributions are presented below, together with a summary overview (updated as of 10 November) of their content and the debate that was held.

The webinar was convened by CEPS in collaboration with the Ukrainian Think Tank Liaison Office in Brussels and the Civil Society Forum of the Eastern partnership.

BREAKING NEWS. At midnight on 9 November, a truce in the war over Nagorno Karabakh was signed by Russia, Armenia and Azerbaijan. An unofficial translation of the text is attached below. The military forces of Armenia and Azerbaijan stay at the positions reached, with Azerbaijan forces regaining the town of Shusha and other regions surrounding Nagorno Karabakh, while the Armenians retain Stepanakert with assured access through the Lachin corridor, backed by around 2,000 Russian peacekeeping forces to be deployed along the contact line.