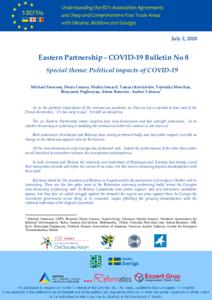 As to the political implications of the coronavirus pandemic, as Chou en Lai is reputed to have said of the French Revolution, “it’s too early to say”. Yet still we should try.

The six Eastern Partnership states comprise four semi-democracies and two outright autocracies.  As to whether democracy or autocracy is handling the coronavirus better the evidence is not clear-cut.

Both autocracies (Azerbaijan and Belarus) have clearly performed badly and lost public support, but still no change in the status quo appears even on the horizon.

Of the semi-democracies only Georgia has performed well.  Indeed the performances of the other three states are all described as somewhere between the incompetent and disastrous.

In both Armenia and Ukraine the relatively new leaderships of Pashinyan and Zelensky had already exited their honeymoon periods well before the corona virus crisis, but this now is enhancing popular dissatisfaction with them both.

Elections ahead for the presidency of Belarus in August and for the parliament in Georgia in October will be interesting. These are the two polar cases of the Belarusian autocracy performing badly versus the Georgian semi-democracy performing well. In Belarus Lukashenko loses public support, and new alternative candidates appear, but they face an uphill struggle against the obstacles the regime can place against them. In Georgia the incumbent government seems likely to be rewarded, maybe offsetting the growing dissatisfaction with the informal leadership of the oligarch Ivanishvili.

Moldova’s extremely fragile and complex political equation is being shaken again, this time by the pandemic, with still unknown potential consequences for its government and strategic political orientations.

In general the pandemic is adding to political tensions, especially in the seven poorly performing states. The jury is still out, what political tendencies may result. Civil society is for sure pushing for better performing political institutions, both for handling the consequence of the pandemic and for improved democracy. Alternative political forces have no clear orientations, although there are darker scenarios for example of populist-nationalist type.

Geo-political sympathies seem to be tilted a bit in public opinion in favour of the EU because of its coronavirus aid, except that in Moldova the pro-Russian leadership engages in conspicuous disinformation policies to the contrary.