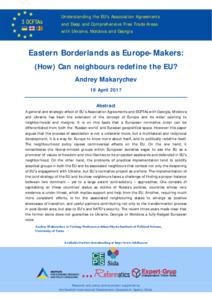 Eastern Borderlands as Europe-Makers: (How) Can neighbours redefine the EU?

A general and strategic effect of EU’s Association Agreements and DCFTAs with Georgia, Moldova and Ukraine has been the extension of the concept of Europe and its wider opening to neighborhoods and margins. It is on this basis that a European normative order can be differentiated from both the ‘Russian world’ and Eurasian geopolitical space. However this paper argues that the process of association is not a unilateral move, but a multilateral and reciprocal development; it is a way for Europe to know more about itself, and to politically redefine itself. The neighbourhood policy causes controversial effects on the EU. On the one hand, it consolidates the liberal-minded groups within European societies eager to see the EU as a promoter of values of freedom and civic liberties to be projected eastwards and defended in EU’s neighborhood. On the other hand, the problems of practical implementation tend to solidify sceptical groups in both the EU and its associated neighbours that contest not only the deepening of EU’s engagement with Ukraine, but EU’s normative project as a whole. The implementation of the joint strategy of the EU and its close neighbours faces a challenge of finding a proper balance between two dominant – yet to a large extent contradictory – approaches. One consists of capitalizing on these countries’ status as victims of Russia’s policies, countries whose very existence is under threat, which implies support and help from the EU. Another, requiring much more consistent efforts, is for the associated neighbouring states to emerge as positive showcases of transition, and useful partners contributing not only to the transformation process in post-Soviet area, but also to EU’s and NATO’s security. The recent three years made clear that the former alone does not guarantee to Ukraine, Georgia or Moldova a fully-fledged European voice.