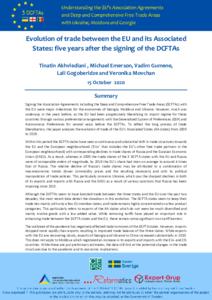 Evolution of trade between the EU and its Associated States: five years after the signing of the DCFTAs

Signing the Association Agreements including the Deep and Comprehensive Free Trade Areas (DCFTAs) with the EU were major milestones for the economies of Georgia, Moldova and Ukraine. However, much was underway in the years before, as the EU had been progressively liberalising its import regime for these countries through various preferential arrangements with the Generalised System of Preferences (GSP) and Autonomous Preferences for several years before the DCFTAs. To reflect the long process of trade liberalisation, the paper analyses the evolution of trade of the EU’s Associated States (AA states) from 2005 to 2019.

Within this period the DCFTA states have seen a continuous and substantial shift in trade structures towards the EU and the European neighbourhood (‘EU+’ that includes the EU’s other free trade partners in the European neighbourhood) with corresponding declines in trade shares of Russia and the Eurasian Economic Union (EAEU). As a result, whereas in 2005 the trade shares of the 3 DCFTA states with the EU and Russia were of comparable orders of magnitude, by 2019 the EU’s share had risen on average to around 4 times that of Russia. The relative decline of Russia’s trade shares may be attributed to a combination of macroeconomic trends (lower commodity prices and the resulting recession) and with its political manipulation of trade policies. This particularly concerns Ukraine, which saw the sharpest declines in both of its exports and imports with Russia and the EAEU as a result of various sanctions that Russia has been imposing since 2013.

Although the DCFTAs seem to have boosted trade between the three states and the EU over the past two decades, the most recent data detect the slowdown in this evolution. The DCFTA states seem to keep their trade ties mainly with only a few EU member states, and trade remains highly concentrated on a few product categories. This particularly refers to exports of the AA states which do not seem be much diversified and mainly involve goods with a low added value. While removing tariffs have played an important role in enhancing trade between the DCFTA states and the EU, there remain some significant non-tariff barriers.

The outbreak of the pandemic has negatively affected trade turnovers of the DCFTA states. However, imports dropped more rapidly than exports resulting in improved trade balance of the three states. While exports with the EU are recovering slowly, exports of Georgia and Ukraine to China increased substantially in 2020. This does not apply to Moldova which registered an increase in its exports and imports with the EU+ and CIS countries. While these are just preliminary estimates, the data still hint at the potential changes in the trade structures due to the pandemic and its economic implications.