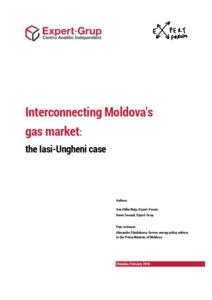 Expanding the Iasi-Ungheni pipeline to Chisinau: challenges and opportunities

The extension of the Iasi-Ungheni pipeline is a major objective for the Moldovan energy sector. Interconnecting Moldova with the gas market in Romania and Europe is the first step to diversify energy sources and routes, which would reduce the monopoly of Moldovagaz and consolidate the country's energy security. Currently, the Iasi-Ungheni interconnector is still much underutilized and can be fully used only by extending the pipeline to Chisinau, where there is the gas demand, and by increasing the transport capacity on the Romanian side.

The project to connect Chisinau to the Iasi-Ungheni interconnector crucially depends on the stabilization of the political situation in Moldova, on political commitment to complete the project, on the effective implementation of the European energy legislation, and on the availability of funding. Moldova's foreign partners condition external financing, including for the energy sector, on the quality of governance and on the actual implementation of reforms. Uncertainties concerning Moldova's will to remain pro-European are a major political and geopolitical risk that could affect the dialogue with Romania and the EU in the energy sector.

The extension of the pipeline will have positive effects only if gas suppliers from Romania can actually enter the Moldovan market and compete with the Russian gas supplied through Moldovagaz. In other words, the project only makes sense if Moldova applies the European energy legislation (the Third Energy Package, the provisions of the Association Agreement with the EU), in particular the effective separation (unbundling) of the transport grids from the suppliers, non-discriminatory third party access to transmission and genuine competition in the energy sector.

A very sensitive aspect of the project concerns its economic sustainability. Although the initial phase (the Iasi-Ungheni interconnector) was mostly a political decision, extending the pipeline to Chisinau (and providing network access of Romanian gas to Ukraine) also enhances the project's economic viability. Major economic constraints concern the relatively small demand in the Moldovan market; the population's inability to pay bills for gas consumption at real market prices; [1] and the debts of Moldovagaz to the Russian supplier Gazprom (amounting to 65% of Moldova's GDP in 2014), which could be used any time as a political leverage. External investors and international lenders are reluctant to get involved in Moldova's energy sector because of the political instability, the structural problems in the sector and Gazprom's dominant position.

All these problems have solutions, but to solve them Moldova needs political will. On the upside, addressing the issues would also bring more active involvement of the EU and Romania. EU could become interested in providing more money for the Ungheni-Chisinau pipeline (especially if gas could be supplied also to Ukraine), but only if there are clear guarantees that the pipeline would actually increase energy security in Moldova (and Ukraine). The financing could be supplemented on the "more-for-more" principle of the ENP, conditioning it on effective transposition and full, consistent implementation of the EU legislation, e.g., by strengthening the regulator's (ANRE) real independence. Romania may also contribute know-how for painful reforms in the energy and social safety nets (from the Romanian ANRE and Ministry of Labour), but it can also help through lobbying in European institutions to speed up energy interconnections with Moldova. In the meanwhile, Moldova needs to restructure its energy sector, liberalize the market and implement EU legislation.