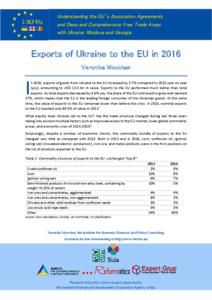 In 2016, exports of goods from Ukraine to the EU increased by 3.7% compared to 2015 year on year (yoy), amounting to USD 13.5 bn in value. Exports to the EU performed much better than total exports. As total exports decreased by 4.6% yoy, the share of the EU continued to grow and reached 37%, which means that the EU is the leading foreign consumer of the Ukrainian goods. At the same time, the value of exports to the EU remained lower than before the crisis. In 2016, nominal exports to the EU reached only 80.5% of value in 2013.

What exactly does Ukraine sell to the EU? Has the trade structure changed during last three years taking into account multiple factors such as improved access to the EU market, lower global commodity prices, and economic crisis of 2014-2015?