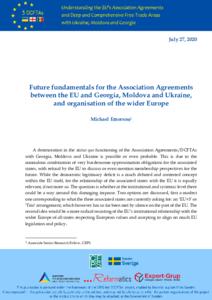 Future fundamentals for the Association Agreements between the EU and Georgia, Moldova and Ukraine, and organisation of the wider Europe

A deterioration in the status quo functioning of the Association Agreements/DCFTAs with Georgia, Moldova and Ukraine is possible or even probable. This is due to the anomalous combination of very burdensome approximation obligations for the associated states, with refusal by the EU to discuss or even mention membership perspectives for the future. While the democratic legitimacy deficit is a much debated and contested concept within the EU itself, for the relationship of the associated states with the EU it is equally relevant, if not more so. The question is whether at the institutional and systemic level there could be a way around this damaging impasse. Two options are discussed, first a modest one corresponding to what the three associated states are currently asking for: an ‘EU+3’ or ‘Trio’ arrangement, which however has so far been met by silence on the part of the EU. The second idea would be a more radical recasting of the EU’s institutional relationship with the wider Europe of all states respecting European values and accepting to align on much EU legislation and policy.