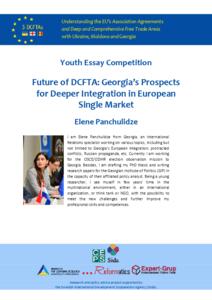 The Association Agreement (AA), including its integral component on a Deep and Comprehensive Free Trade Area (DCFTA), between the European Union and Georgia fully entered into force on 1 July 2016. Despite the technical nature of the document, the political rationale of the agreement is still in line with Georgia’s longer-term perspective to materialize its European choice and aspirations.

Against the background of enduring approximation with the EU acquis communautaire, growing bilateral trade under the DCFTA and success in the process of Visa Liberalization, the options are kept open for future formats for Georgia’s more intensive engagement with the European Union. Even though DCFTA hasn’t yet been fully operationalized and challenges still exist in the process of its full-fledged implementation, it is essential to analyze what it means for Georgia’s European path as a new benchmark and deliverables to be attained. Bringing the European best practices to the reform agenda not only boosts the bilateral trade dynamics but greatly contributes to Georgia’s long-lasting objective to build a European state with stable and functioning economy.

While the issue of opening the European Membership Perspective to EaP countries is highly politicized for the time being because of various internal and external factors in the EU, enhancement of ties in trade seems to be one of the viable opportunities in the foreseeable future. Georgia should be pragmatic and use all feasible tools and mechanisms on its way to EU membership. Deeper integration into the European Single [Internal] Market could be an important part of this effort.

Despite the bureaucratic nature of the European Union, the institution’s corporate philosophy stands on openness and shows readiness to develop tailor-made ties with partner countries based on the case-by-case approach. Thus, upgraded formats, which can go beyond the existing frameworks of trade/economic cooperation, could serve the interests of both the EU and the partner countries.

The present Policy Brief overviews EU-Georgia economic relations in terms of DCFTA implementation; it also assesses existing achievements and challenges, as well as discusses the prospects of deepening the trade/economic ties and Georgia’s further integration within the European Single Market.