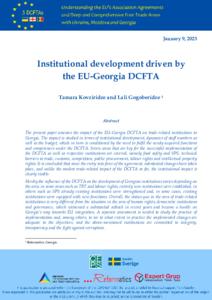 The present paper assesses the impact of the EU-Georgia DCFTA on trade-related institutions in Georgia. The impact is studied in terms of institutional development, dynamics of staff numbers as well as the budget, which in turn is conditioned by the need to fulfil the newly acquired functions and competences under the DCFTA. Seven areas that are key for the successful implementation of the DCFTA as well as respective institutions are covered, namely food safety and SPS, technical barriers to trade, customs, competition, public procurement, labour rights and intellectual property rights. It is concluded that since the entry into force of the agreement, substantial changes have taken place, and unlike the modest trade-related impact of the DCFTA so far, the institutional impact is clearly visible.

Hereby the influence of the DCFTA on the development of Georgian institutions varies depending on the area: in some areas such as TBT and labour rights, entirely new institutions were established, in others such as SPS already existing institutions were strengthened and, in some cases, existing institutions were equipped with new functions. Overall, the status quo in the area of trade-related institutions is very different from the situation in the area of human rights, democratic institutions and governance, which witnessed a substantial setback in recent years and became a hurdle on Georgia’s way towards EU integration. A separate assessment is needed to study the practice of implementation and, among others, to see to what extent in practice the implemented changes are adequate to the objectives, and the above-mentioned institutions are committed to integrity, transparency and the fight against corruption.